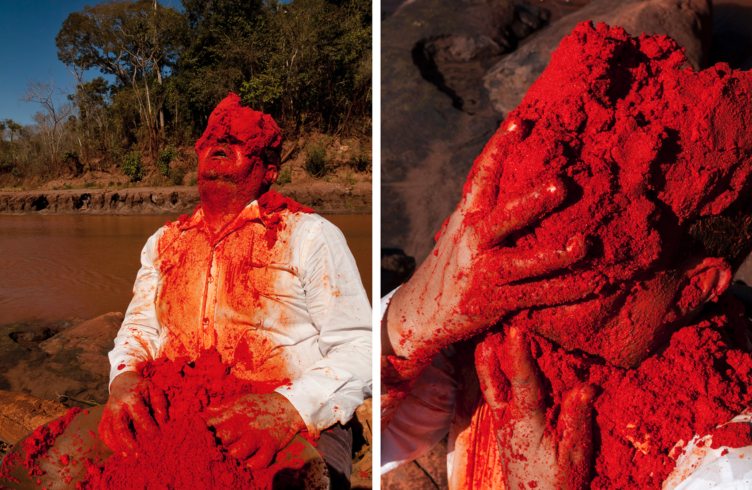 A commonplace throughout modern art is the search for an “other” who could invigorate and allow a self-criticism of their own traditions. In the Brazilian case, in the context of São Paulo, specifically, this otherness was indigenous, used by the group around Oswald de Andrade and Tarsila do Amaral as a form of resistance to European cultural hegemony. Although the project of modern artists, poets and musicians was radical, its class boundaries and the often homogenizing narratives about their productions undergo increasing revision as the “Week of 22” approaches its centenary.

One of the projects that problematize this debate is the art critic section of The Brooklyn Rail magazine, launched in February 2021 and co-edited by North American writer Sara Roffino and Brazilian artist Tiago Gualberto. In the title of the edition, there is a twist of the modernist statement, which is placed in the interrogative: Só a Antropofagia nos Une? (Only anthropophagy unites us?). The diversity of voices and records throughout the texts allow a nuanced look at the issue. The idea of swallowing the other for self-formation finds contexts of class, race and power that expose tensions present, but often sublimated, in the artistic circuit.

In addition to introducing the history of art in Brazil to an international audience, the section recognizes anthropophagy as an issue that touches on different areas of cultural experience in the country, but problematizes the narratives surrounding the subject. “We cannot celebrate a primitivism of a hundred years ago”, says Tiago Gualberto, evoking a text by Renato Araújo da Silva, present in the edition. The editors began their dialogue in 2018, when, due to the retrospective of Tarsila do Amaral at MoMA-NY, Roffino was amazed by the painting A Negra (1923). For her, the exhibition demonstrated a reductionist vision of modernism in Brazil, with racist and idealist aspects, and she decided to research Brazilian artists who were critically thinking about the period, in search of counter-narratives to the institutional discourse. “North-South dialogue takes place in only one direction, but we can reverse this flow”, says Sara Roffino to seLecT.

On the magazine’s website, it is possible to access the texts in Portuguese and English, also verifying the differences in thought conditioned by the language and the limits imposed by the translation. The print version that is distributed to the New York art community, however, is only in Portuguese, reinforcing language barriers, but also questioning the international art English that dominates publications in this field.

Plurality of records
Só a Antropofagia nos Une? includes academic analyses, poems, interviews and texts with a markedly oral tone. In essays written without capital letters, the artist rafael amorim – who uses the non-hierarchy between words throughout his production – reviews the nationalist dimension of the atrocities committed by Bolsonaro. The poet Sergio Vaz releases the “Manifesto da Antropofagia Periférica” (Peripheral Antropofagia Manifesto) and Denilson Baniwa presents the poem ReAntropofagia.

The artist Caetano Dias publishes a text composed of appropriations and twists of references that discuss the idea of Brazilianness, from the poem “Canção do Exílio”, by Gonçalves Dias, to the song “Ideologia”, by Cazuza, exposing persistent violence and inequalities in the country’s history. Commenting on the indigestible aspect of Brazilian modernism for indigenous and black populations that served as a theme for those artists, the article “A qualquer hora carne dura” (Hard meet at anytime) puts into conflict idyllic and negative views about Brazil, mixing up different interconnected temporalities. The text is part of the research by Caetano Dias – who is known for producing edible sculptures, in which the human figure is built with sugar and brown sugar – on the symbolic, political and physical dimensions of feeding on the other.

A few pages separate the text by the Art History Professor Luiz Renato Martins, on the rebellious dimension of Antonio Dias’ work, and the report by the graffiti artist Cripta Djan, on the violence he suffered when intervening on the white walls of the 28th São Paulo Biennial. “The curators had said in the media that the space was open to dialogue with society, open to urban interventions. We felt invited,” says Djan. 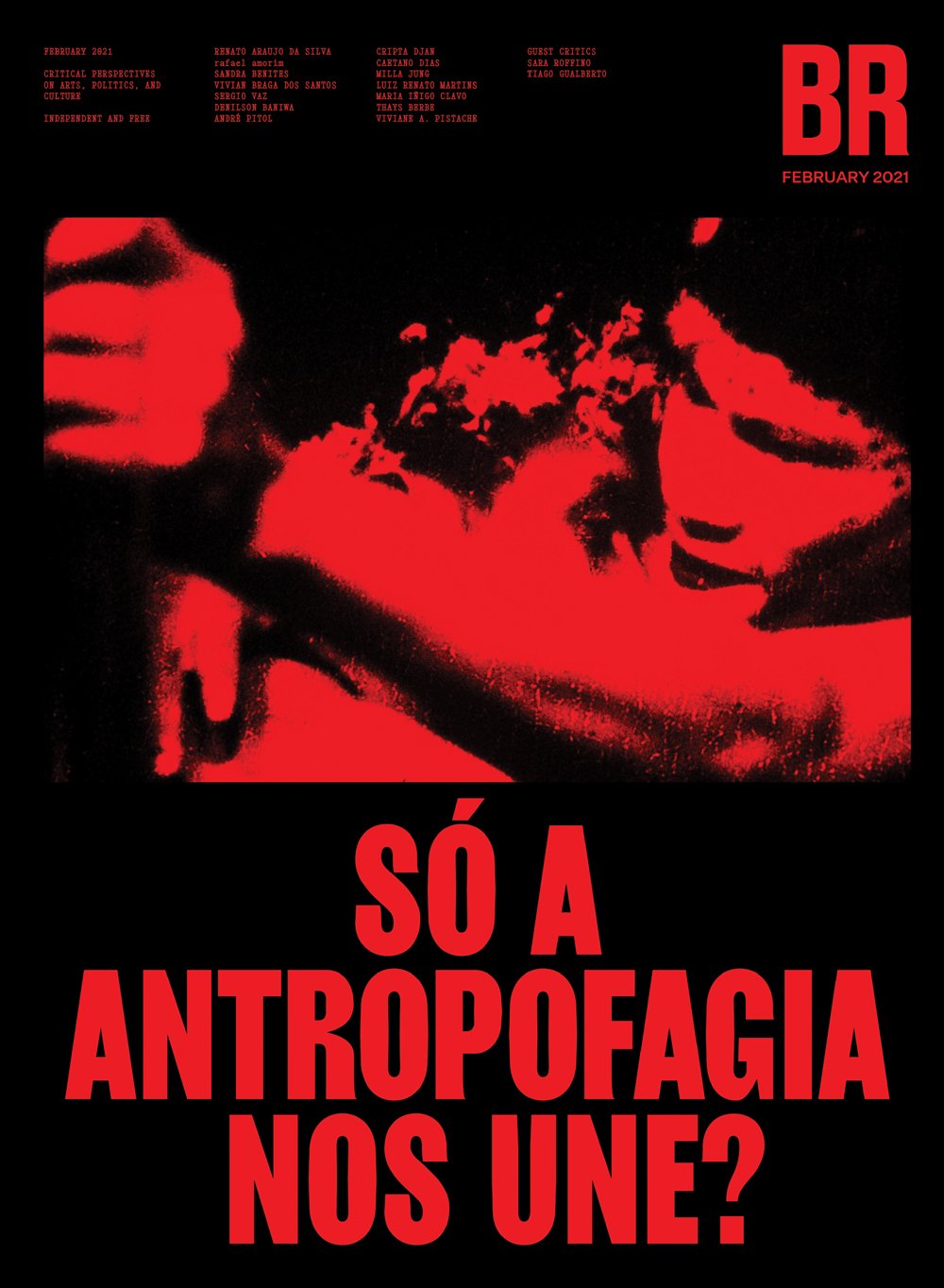 Epistemological review
This gathering of legitimate and marginal discourses shows less obvious and less domesticated dimensions of the idea of anthropophagy, beyond the cliché. There is a review of modernism in São Paulo, but the criticism of new forms of self-exoticization of the art produced in Brazil is also clear. The presence of peripheral artists in this discussion, however, is not reduced to a claim for representation. There is even a critique of the theatricalization of dissidence or the quotas of diversity that haunt the artistic circuit today. In addition to escaping the categorizations these intellectuals and artists are subjected to, there is a care in not reinforcing the places where we place the “other”. “The institutions celebrate a few black and indigenous artists, because they satisfy the taste buds about what is expected of them”, says Tiago Gualberto.

The magazine proposes a review of the field of art itself, which, even with progressive guidelines, ends up reproducing dynamics of exclusion and inequality. There is a reflection on the role of institutions and established places of knowledge in the construction of what is understood as Brazilian art, and the variety of voices points out how the problematic aspects of history need to be seen from different angles, established or not. “What is cannibalism for some is inescapable for others”, writes screenwriter Thays Berbe.

The multiple narratives surrounding the experience of anthropophagy and modernism generate a set of texts without celebration, but also without rancor, recognizing the importance and conceptual limits of that premise throughout history. Started as an explicitly experimental and fragmentary publication, the project opens up spaces for a series of reflections and actions, highlighting its long-term relevance.

Artigo anterior:
Uýra: the snake of Amazonian waters in the face of environmental degradation  Próximo artigo:
Daydreaming is a trip on the riverocean of imagination