Sex and Art is the theme of seLecT's 41st edition, with actor Paulo César Pereio on the cover

ARCOmadrid's magazine sector without seLecT. DHL considered it to have obscene content and refused to ship it (Foto: Caio Reisewitz)

The area that should be occupied by seLecT magazine in the magazine sector of ARCOmadrid art fair, that was opened today by the king of Spain Filipe VI, awakened empty. The magazine was surprised by a decision from the carrier DHL, multinational company hired by the brazilian post office to transport the copies to Madrid.

The batch of magazines destined to ARCOmadrid should have followed in the 21st to Spain, where it would have arrived at 7a.m. from the 25th. The first warning to seLecT came from the manager of La Aduana de Coslada, informing that the batch hadn’t arrived in Madrid.

In the afternoon of the 25th, the post office’s Sedex Mundi department sent an email to Editora Três, seLecT’s publisher, informing that they were to return the package with copies of seLecT’s 41st edition because it was “dispatched irregularly”. The email, signed by Sedex Mundi, states that “after an analysis made by the logistic operator the material’s content was considered unsuitable to be sent”.

After interrogation by seLecT and Editora Três, in the 26th of february, the operational manager of São Gabriel Agency in São Paulo wrote that he awaited for “the object to get into São Gabriel’s unit’s Irregularity Statement” so he could inform what would this alleged unsuitable content be. It was also written that, during the act of posting, the post office works with NTF when it comes to shipment by companies. “We are not authorized to open packages and verify their content”, wrote the manager.

On tuesday, the 26th, the publisher was informed by the post office that “the magazines in question fit some of the criteria of prohibited items”. In the following statement, the information was that DHL judged it as “unsuitable (indecent or obscene)” and therefore sent it back to the post office. 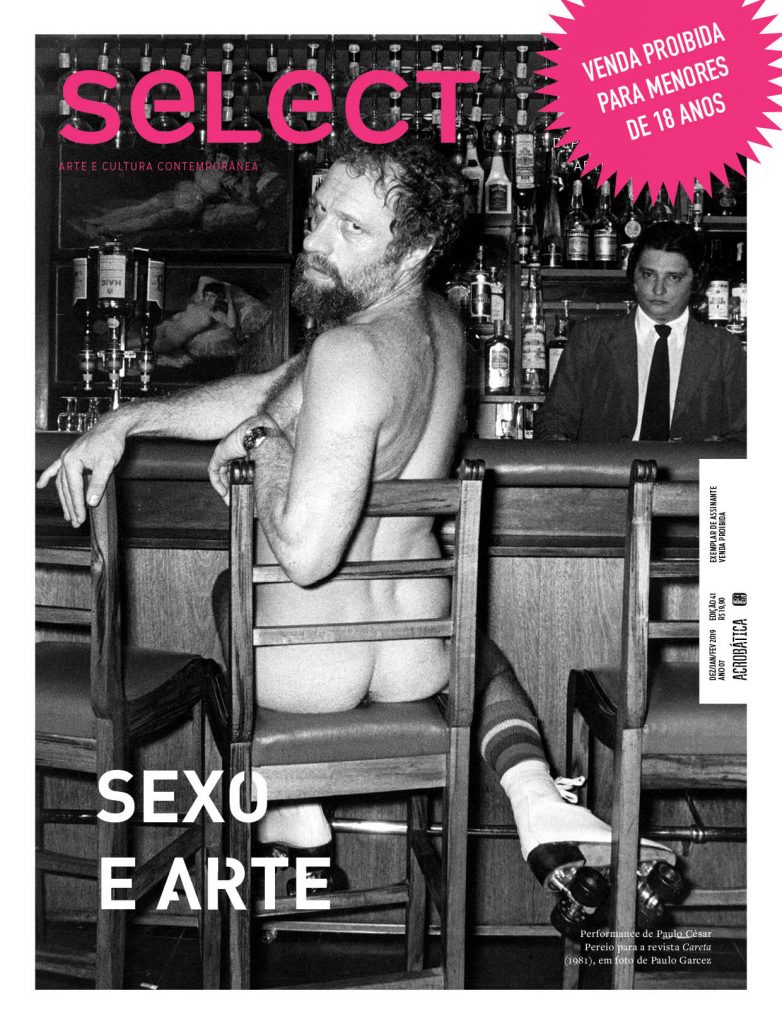 The cover of seLecT 41, dedicated to the theme Sex And Art, has a picture of the actor Paulo César Pereiro from 1981

“This edition was 100% wrapped”, says the Editora Três’ manager of Off-the-shelf sales, Yujo Lenie Tahan, about the plastification system of each magazine. The procedure was heeded because the inside pages of seLecT’s 41st edition, dedicated to the theme Sex and Art, have some pictures with nudity and sexuality.

On the cover, seLecT 41 informs with details that the sale is forbidden for people under 18, as established by brazilian legislature.

It was simply not expected that the multinational company DHL was going to refuse to ship the plastified copies to Madrid.

“We were caught completely off guard and we are devastated”, says seLecT’s Editor-in-chief, Paula Alzugaray “We had already sent invitations to the international public informing that the magazine would be in ARCO. After all of the recent episodes involving censorship to artistic activities in Brazil, we never would have imagined that we would be censored when leaving the country”.

On the cover of seLecT’s 41st edition there is a historical picture of a performance by the actor Paulo César Pereiro in 1981. The photograph was originally published in Careta magazine, on that same year.

seLecT magazine is distributed in newsstands in Brazil and it can be read and subscribed to in the web-address:  www.select.art.br. It is also available for off-the-shelf sales on App Store and on Google Play, to be read on cell phones and tablets.