Jaider Esbell and the overlapping of worlds

The series A Guerra dos Kanaimés materializes the Macuxi understanding that reality overlaps past, present and future 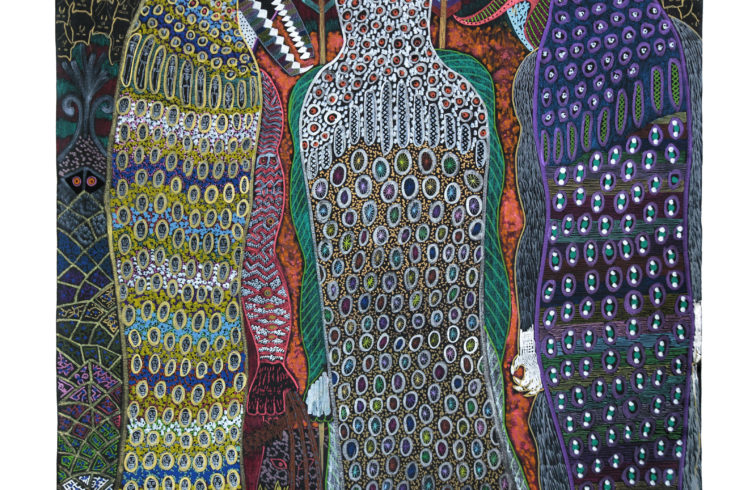 On an opaque black background made with acrylic paint, Jaider Esbell draws with Posca (a pen also with an acrylic base that allows a homogeneous coverage) various beings superimposed by their textures and transparencies. The series A Guerra dos Kanaimés, produced between 2019 and 2020, consists of 11 canvases measuring 145 x 110 cm – which provokes in the viewer a bodily clash with the image – and was presented at the Vento exhibition, at the 34th São Paulo Biennial. The black background emphasizes the feeling of a spectral world, while the bright colors of the drawings bring vibrancy to the image, creating an atmosphere between the lysergic and the cosmological. The hollow aspect of these figures constantly shifts the focus between isolated and juxtaposed beings. Textures refer to patterns and seem to oscillate between the descriptive effect of materials, such as fabrics and plants, and the attempt to make sensations visible. In segments of the painting, the vertical lines suggest the straw of a garment, the geometric trace of a frog’s skin, or the heavenly atmosphere. In other parts, entities floating over the landscape seem to stare at us, in a transit between the concrete and the imaginary, the material and the spiritual. 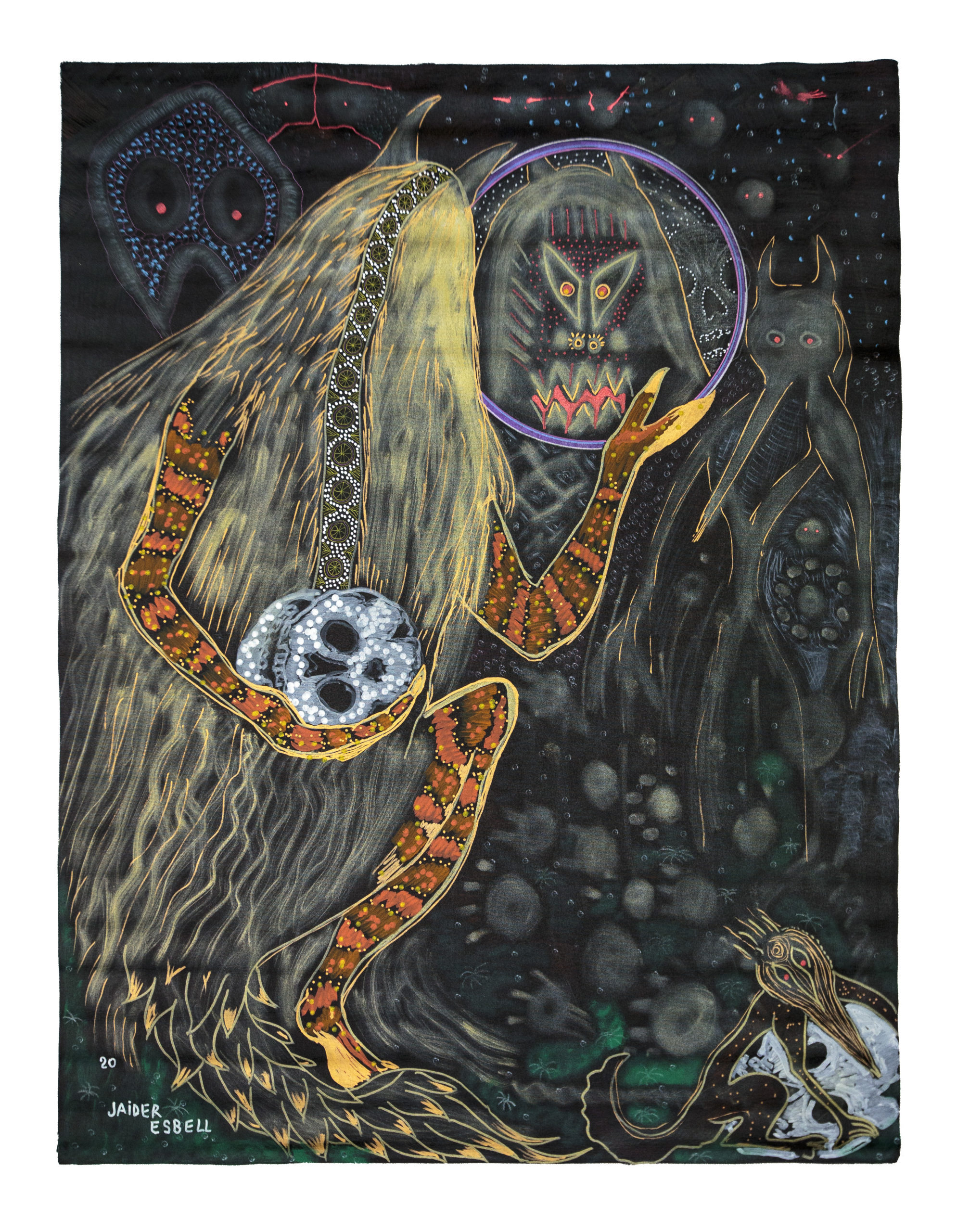 In the Makuxi cosmogony (native people from the state of Roraima, close to the border with Colombia and Venezuela), the Kanaimé is a being linked to metamorphosis that dialogues with the immaterial and magical world. When embodied in a person, she becomes another creature, a predator or a protector. She is also directly linked to the social issue and to a very specific way of doing justice, usually in a violent way, but justified in the context. “This is a theme I’ve been working on since 2011, at the beginning of my pictorial production,” says Jaider Esbell to seLecT. “When invited by the Biennial, I saw this issue of conflict in the form of the current policy that subjects us to external forces and values, which are hegemonic. There is a war of the worlds going on, in fact, for territories, for ways of thinking and for resources.”

In indigenous cosmogonies, there is no separation between the things of the world, the individual and the collective, the spiritual and the material. If, in his first paintings, Esbell constructed the image using homogeneous blocks of color, in this recent series, the procedure of superimposing textures and images materializes the transit between different dimensions. “The material and immaterial worlds in our culture are very easily transposed. The subconscious, the magic and the spiritual are fields of dispute and are in conflict.” 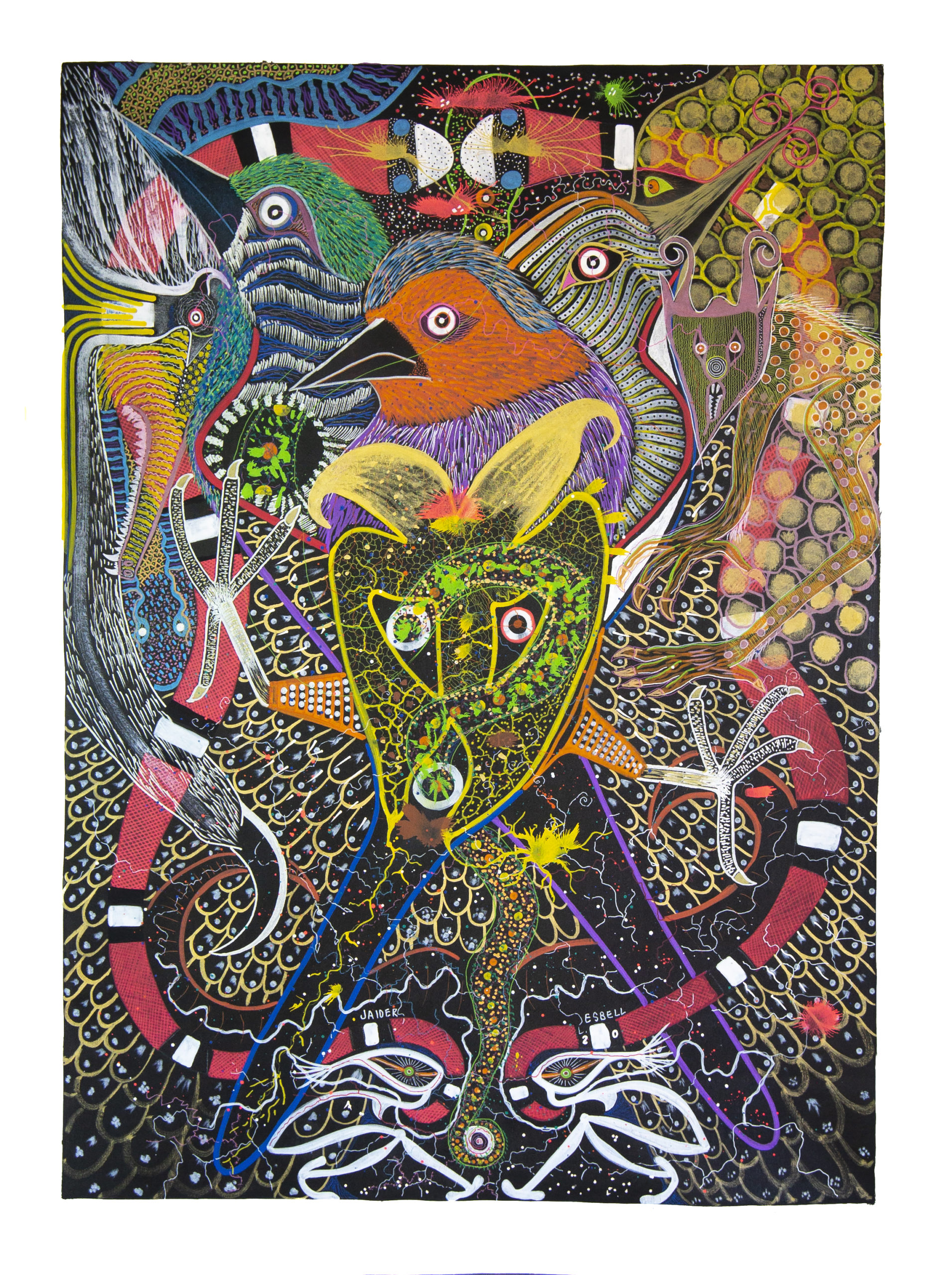 Interworlds
A recurrent operation in contemporary indigenous production is the transposition of images linked to their ethnicities, especially graphics, to techniques, let’s say, western, such as painting on canvas. If the patterns applied to skin, fabrics and ceramics are connected with practical life, including specific functions, of protection or changing of cycles, the history of painting (on canvas) is directly linked to the Western tradition of art. It is a language that presupposes distance between spectator and work, emission and reception of a message, in addition to an entire institutional and economic system that separates art from the full experience of everyday life – unlike the indigenous practice. 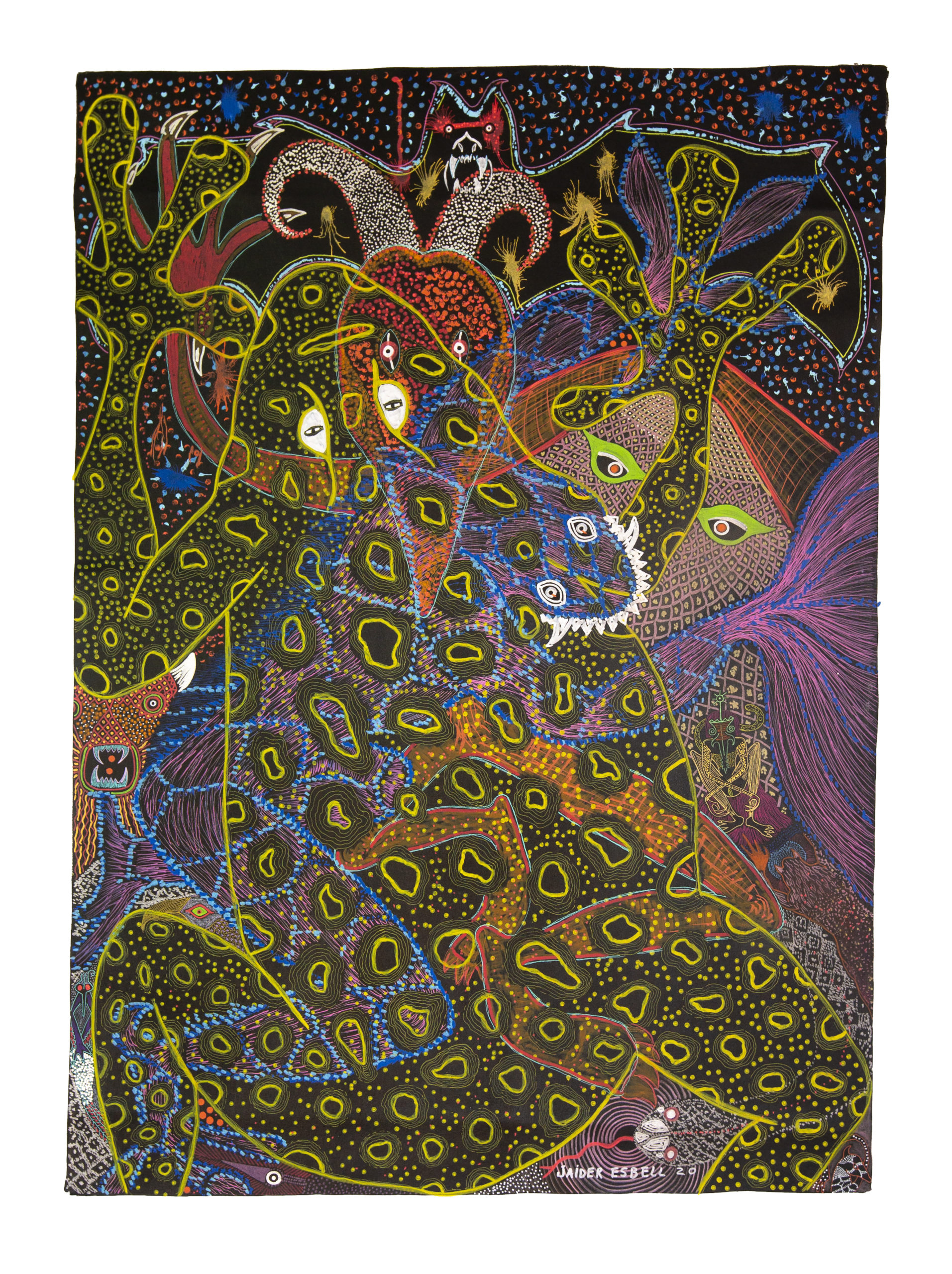 In an interview for the 34th Biennial, Esbell points out how he claims authorship of his own language, without appropriating a collective symbol for individual purposes, even though, of course, this imagery and this collective aesthetic are at the base of his work. In addition to the immediate transposition of indigenous imagery to Western techniques, his recent paintings create a compressed and non-linear temporality by emphasizing an internal aspect of pictorial production: construction by layers. The series A Guerra dos Kanaimés materializes Makuxi’s understanding that reality has several dimensions that interconnect and overlap each other, with elements of the past, present and future in symbiosis and feedback.

Jaider Esbell’s recent paintings make the transition between these different ways of operating, finding its own syntheses of vocabulary and critical positioning. The language and the imaginary of the work demonstrate time as simultaneity and interaction between the subjective and social, magical and political fields, in a transit between worlds. 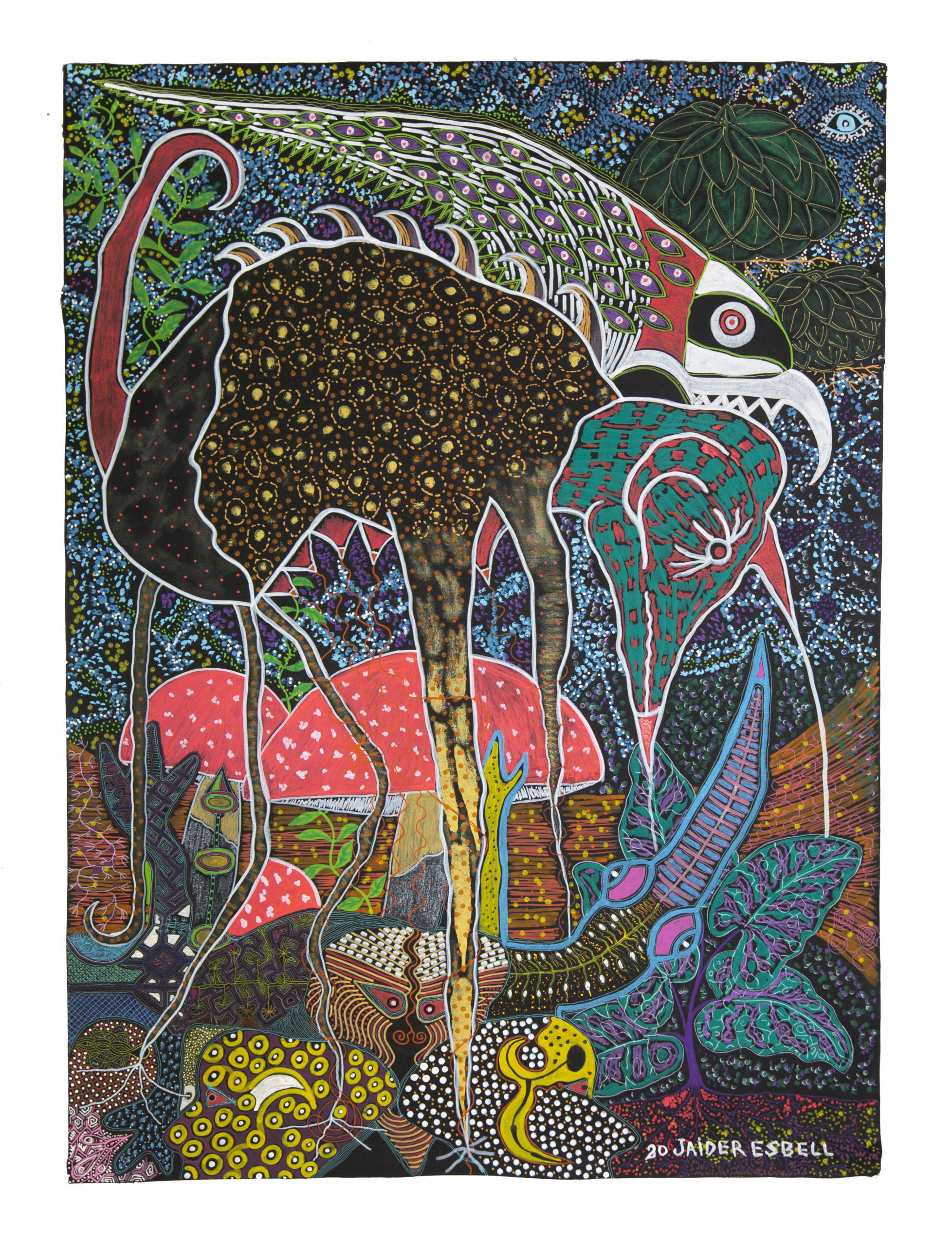 Artigo anterior:
Daydreaming is a trip on the riverocean of imagination Próximo artigo:
Themônias: montage and LGBTQIA+ activism in the Amazon