The necessary writing of history by native peoples 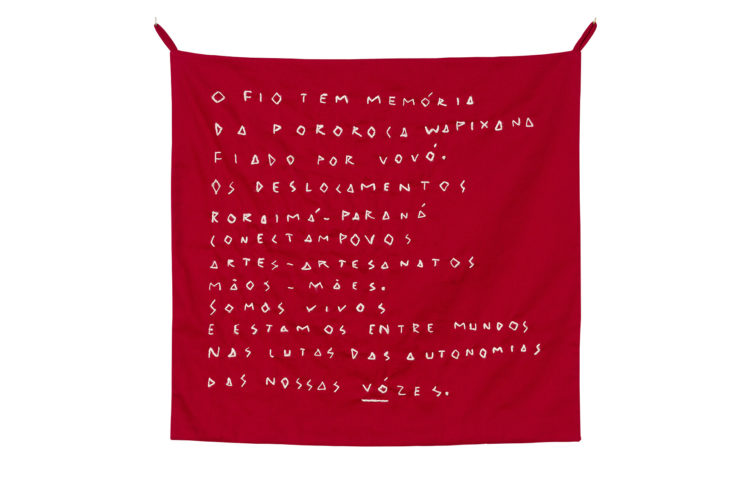 Experiences are the very essence of the word, because a road, if it has soul, moves affection, lucidity and utopias. Revival of gratitude is the gestation and birth of thoughts awakened in actions. The presence of a people, their voices, the forest smell and the insistence on keeping themselves alive in words are affective sowings, that root through the efforts of the native authors in present time.

Thinking about the place of original peoples in history and literature, it is possible to see that the development of a register of the historical processes that mark their presence and achievement has been denied and silenced in the traditional description of history and other sciences, by a colonizing system and by writing from the perspective of the other, writing “from the outside to the inside.” Therefore, it is necessary to understand the original peoples and their remnants/descendants in their own times and places, valuing their experiences and narratives, rethinking and deconstructing the memory of their history registered from the perspective of the colonizing male.

From the mid-19th century, the National Constituent Assembly extensively discussed the strengthening of the concept of nation. The best model, chosen by the Brazilian Historical and Geographical Institute (IHGB) to write the History of Brazil, still in 1938, was the dissertation by Carl Friedrich Philipp von Martius. The German explorer, having a medical training, proposed a history that had as a guide the blending of three races to explain the formation of nationality, emphasizing, in his analysis, the valorization of the white element, besides suggesting a progressive whitening “as a safe path to civilization.” In that process, with the intention of inserting control mechanisms, school education and the writing of a Brazilian history became the chance of consolidating the social and cultural conformation in which originals/indigenous, Afro-Brazilians, women and the population as a whole were inferior beings.

Over the centuries, both in literature and in historical records, narratives generalize the participation of the original peoples as “Indians,” collaborating to affirm their non-contemporaneity, as if indigenous people were a homogeneous whole, equal to each other and only making part of the past. Original Peoples is a term that refers to 305 ethnic groups in Brazil today (which were over a thousand at the time of the European invasion.) The word “Indian”, used in the 15th century for native peoples, comes from the name of the Indu River, from the Sanskrit Sindhu, as one of the seven sacred rivers of India was known, reducing the diversity of peoples to a single word that has no reference in any of the native peoples’ languages.

The studies made of these materials led to the conclusion that the original peoples are not part of the Brazilian society and that the relationships only took place at the time of the colonizers’ arrival in Brazil. A scientific hierarchy of the written word was consolidated, directly or indirectly attributing invisibility, inferiority, passivity and exclusion to original peoples.

In short, there is a tendency in historiography to follow a perceptible exclusionary posture: the “office of historians” is an office of white men, who wrote history in the male, patriarchal and colonizer model. The original peoples, for a long time, were “objects” of study. It became commonplace to write about, but never with indigenous people. It was not possible that we could be the authors of our own historiography. The original peoples’ writing, in this colonization process which extends to the present day, is a place of silenced voices.

We decided to write
The tragic contact with the colonizers reveals, in addition to genocide, also the ethnocide which, together with other factors, still limits the understanding of “society” (I refer to the non-indigenous one) of the real protagonism and performance of the original peoples. Brazil’s vast ethnic plurality is still unknown by most part of society. In this perspective, the writing of oralities and memories of our people is an instrument of understanding, because it privileges the participation of people who witnessed a historical process in Brazil. The plurality, proposed by the transition from orality to writing, unfolds in a rich dialogue.

The publication of indigenous authors intends to cross “the walls of official history” and, with it, to enable people to understand that the natives are part of society, that they have rights and that they can speak and write about the topics they wish, including, and mainly, the history of their own peoples. About our concerns, we write. To honor our ancestors, we write. We write because there are within us a forest, affections and a struggle. We write to deconstruct colonizing records.

There is a vast indigenist bibliography that was not written by original/indigenous persons. Such writings appropriate our knowledge and wisdom, often translated into several languages, except in the language of the ones who inspired the record. And the author is always the other. A people who are original will no longer be silenced in their own territory and in their knowledge. So, also for this reason, we decided to write.

Artigo anterior:
Plant the body Próximo artigo:
Made in Balém