The native, the alien and the displacement from the periphery to the center

The dilution of binarisms in Anna Bella Geiger's fundamental work 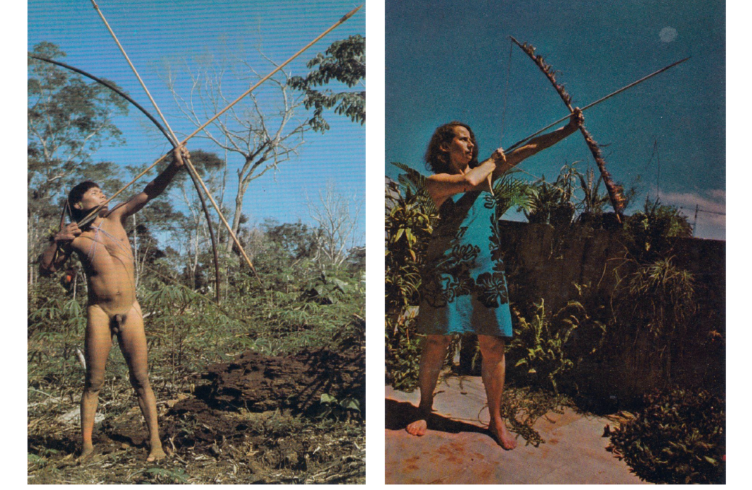 “The center is not simply static” (Circumambulatio, 1973)

The dismantling of binary logic is one of the great contributions of queer and post-feminist theories to the social and behavioral transformations presently underway, putting into demolition mode the rules that for centuries have supported the colonization of bodies. Those same forces of destabilization of the logics of power over territories came into play in Anna Bella Geiger’s studies on the center and polarities. Brasil Nativo/Brasil Alienígena (Native Brazil/Alien Brazil, 1976-77) is a turning point in this process, when all kinds of binarisms, such as the part and the whole, the inside and the outside, the I and the other, start to get unbalanced and mixed up.

The work is made up of nine pairs of images, but that doesn’t mean it speaks of extremities, or complementary opposites. On one side, a collection of postcards purchased by the artist at a newsstand shows everyday scenes and rituals of indigenous people of different ethnic groups – Bororo, from Mato Grosso; Suiá and Trumai, from Alto Xingu; Uaika, from Alto Rio Negro. On the back, one reads “Native Brazil.” On the other side, we have the re-enactments of the same indigenous acts, performed by the artist, children and friends, in the context of the city of Rio de Janeiro. The back reads “Alien Brazil… With my unpreparedness as a primitive man.”

Art critic Estrella de Diego, in the text On the Myth of Belonging – Other Forms of Being a Feminist, points to the uses of the postcard in the construction, domination and invention of worlds, at the service of colonialist agendas. Behind the stereotypes of an idyllic and untouched life, one could guess the genocidal policy that infiltrated the Amazon, on the highways opened by the military regime.

When analyzing the photographs of the Bororo, Suiá, Trumai and Uaika, it is clear that they are indigenous people performing their role as “natives”, whether sweeping the floor in front of the maloca, dancing, handling the cassava pestle, or posing for a photo beside the Catholic nun. What Anna Bella Geiger does in the “Alien Brazil” image set is to reenact these reenactments, as an artist, woman, white, urban: on the sidewalk of a modernist building in Copacabana, on the terrace of her apartment in Flamengo, holding a grocery bag, petting a pet. 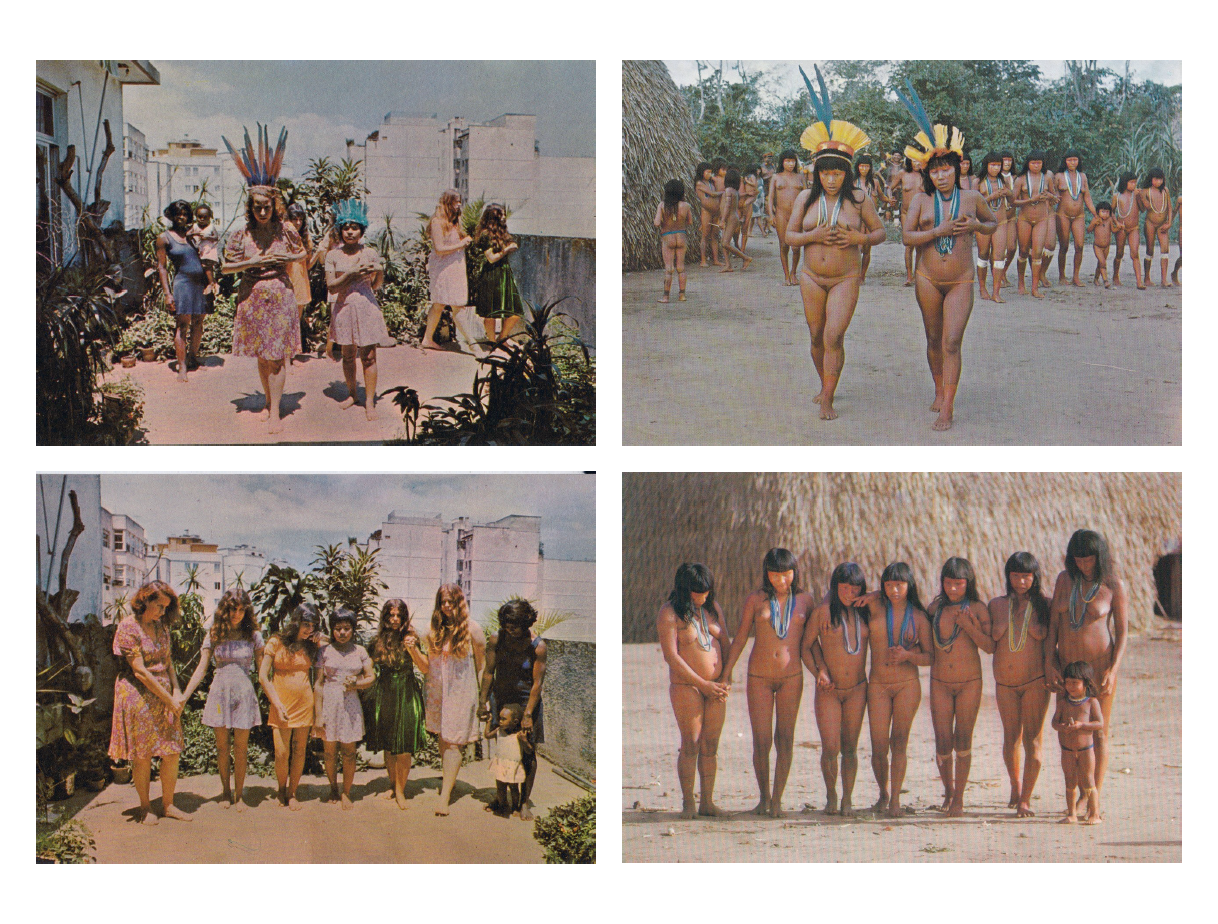 Mirroring and empathy
Among the pairs of images, one of them draws particular attention: on one side, a Suiá Indian girl smiles, observing her own image in a mirror. On the other, Geiger leans toward a water hole on the ground, in the classic Western pose of Narcissus contemplating his own image. In the mirrored images of both women – one with her body and territory threatened by invasions; the other one with its acts and gestures curtailed by censorship – the reflections of the same oppression. Diluted hierarchies in these mirrors, we ask ourselves: Who is the native here? Who the alien?

“The ‘Native Brazil’ postcards brought me the question: where is the alien Brazil? And what happens in these two Brazils, the native and the alien? That motivated me to create the relationship: our lack of voting, our lack of citizenship,” says Anna Bella Geiger to seLecT.

Due to its character of destabilizing forces, Brasil Nativo/Brasil Alienígena is a foundational piece in the artist’s work. It names the exhibition that was on display at Masp and Sesc in 2019, and which in 2021 went to Smak Antwerp. It takes forward the research on the relativity of the center and periphery concepts – Aqui é o Centro (Here Is the Center, 1973) – and opens paths for the map photogravures – Mapas Elementares (Elementary Maps, 1976); Local da Ação (Place of Action, 1979-80) – which put South America at the center and Rio de Janeiro at the cultural center of the world.

Displaced to the 2022 context, the work acquires centrality in current discussions related to diversity, decoloniality, environmental crisis, fake news and denial. The image of the supposedly undisturbed life of Amazonian villages, reproduced on the newsstands of a censored Brazil, is made for Bolsonaro’s Brazil tweets: “the Amazon forest is not burning.”

Why not smell it?
But another disturbing element comes to blur the certainties about who is the native and who is the alien in this story. Her name is Anna Bella Waldman. “Do you know my last name is Waldman? – the man from the forest,” says the artist to seLecT. “When I got married in 1956, I was Anna Bella Waldman, but because of those macho hierarchy things, at that time the single name disappeared and the husband’s name was acquired… it took me a while to assimilate it, but I started signing Geiger. I like the Geiger surname, which means violinist, but it’s not my true face of a Waldman, which is wilder, that comes from the deep forest.”

The spiral of drifts, oscillations and fluctuations in Anna Bella Waldman Geiger’s work was completed when, in October 2020, she returned to the series in process Rrose Sélavy, Mesmo (Rrose Sélavy, Really, 1997-2020). “I have been doing Rrose Sélavy’s insertions in newspaper pages for about 20 years, when the headlines bring me sentences that can have double meanings,” she says. Pasted on a photograph of an indigenous woman and under the so-called “Jungle Fever,” in the second section of O Globo newspaper, Duchamp’s queer alter ego is summoned to once again provoke and destabilize our certainties about who is in the center and who is at the margin. 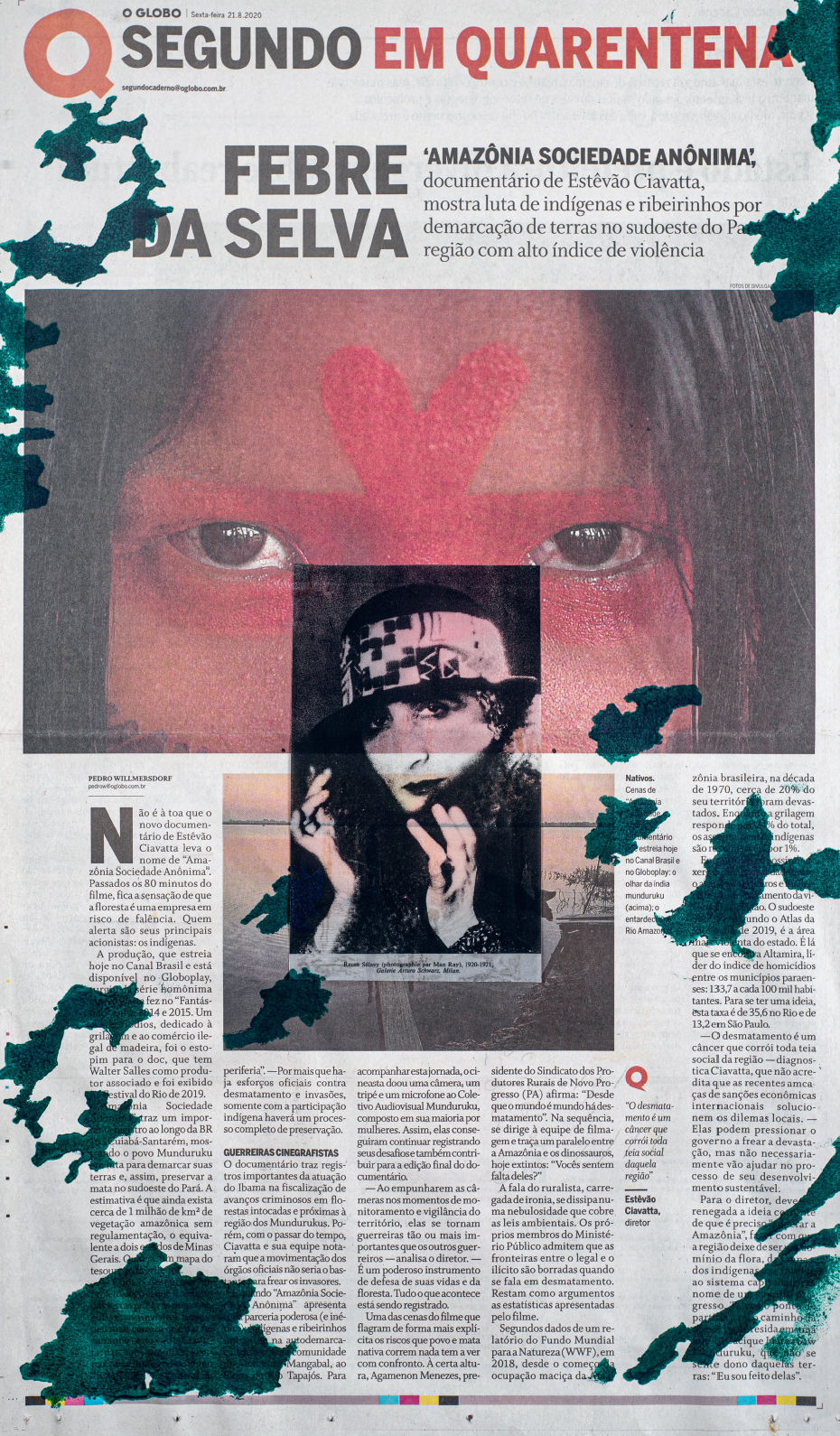