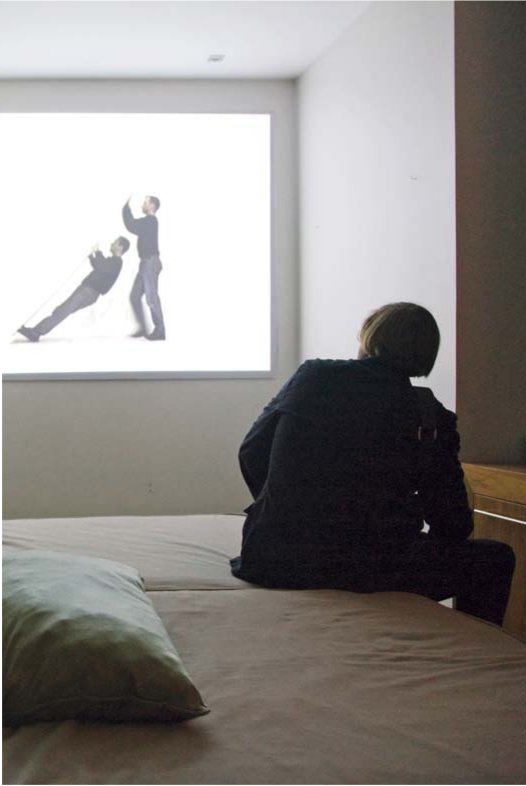 Video art is transforming the museum and our cultural context. To begin with, it has implied a paradigm shift from the white cube, that established the pictorial paradigm of the 50’s, into a black box

When artists seize a new technical tool, a new way to transform matter or a new process of representation, quality leaps tend to occur in the cintext of art. A new technique, a new device does not generally remove the former ones but alters the way in which the previous techniques are used and, above all, will alter the conventions that surround the reception of artworks. After the second half of the last century, a series of consecutive technical innovations were immediately translated into significant quality leaps and profound ruptures in relation to the notion of the work of art (what is and what is not a work of art) and, above all, in relation to the role of the art institution, the museum (what can and shall do a museum with the works of art). The irruption of a technique called video injects speed into art and allows a set of actions that the actors of this change during the 60’s could not even imagine then. Video, as a technique and as a material, will not only replace film, but will moreover turn the museum inside out.

It is true that video has now gained a place in contemporary art history: very few collections ignore it and the bibliography on this medium is already extensive. Even in the Iberian context, where the writing of history is such an arduous task, we have a vast bibliography, numerous museums’ publications and exhibitions. Video has evolved from being an additional instrument to the practices of the second half of the 20th century avant-gardes to become a category of its own, to name departments of important museums and to be one of the most extended supports to present art throughout the globe.

Back to the years of emergence and first experiments with the medium, it seemed evident that video should play an important role in the emancipation of a new type of art from the market and the official art institutions. Nowadays we find that it is inserted at the core of both institutions. Furthermore, a great part of what was once referred to as experimental cinema is conveyed nowadays in the form of video through museums and art circuits, since the regular diffusion network of non-commercial films has dwindled almost to its extinction. Consequently, video would seem to rescue – even if partly – the spirit of a certain kind of endangered cinema.

Museums and film institutes seem to dissent more and more in their missions on the same study object. From this point, I would like to provide some thoughts not just on what and how happened in the past, but on which questions are posed today by the “video medium” to the museum institution. To begin with, it has implied a paradigm shift to the physical structure of the museum. From the white cube that established the pictorial paradigm of the 50’s, video, since the 1990s, transforms the museum into a black box. Video introduces sound, music and human voice into the utter silence of painting, sculpture, drawing. It also introduces time, theatrical action, the logic of mass media (television and cinema) and withdraws us from a world determined by Euclidean space to propel us to another one, essentially mental and lacking of laws such as gravity or other forces that modern physics has quantified. It is also through video that the experiments which interrogate the relation between space and aesthetic pleasure have been recovered.

Russian constructivists, followed by Dutch and Pop artists among others, have questioned the hierarchies between floor, wall and ceiling as spatial determining factors. Gordon Matta-Clark applied some of these intuitions in their literal sense on ephemeral works that reach us through their cinematographic documentation. Sculpture found in video a wonderful instrument to become a new art genre, a new criteria, a new specialization: the installation. Video has not finished yet transforming the museum because, probably, the museum, in turn, has transformed video to fit its institutional or economic needs.

Barcelona is a city that has to commit with the future. Our past and heritage situate us in a prestigious and honorable position alongside our neighbors. The potential of the city -and the country which endorses it- to play a significant role in the cultural map of the world we inhabit implies believing in the future rather than in the possibility of recreating a past ideally synchronized with the canonical discourses of the Western imaginary. The future of our heritage involves investment in production, confidence in risk-taking, commitment with innovation and the acknowledgment of the prominence – the voice that minorities are acquiring in a globalized world which tends to equate everything with the lowest common multiple. Initiatives such as the LOOP Fair promoted by Screen from Barcelona contribute to this vision which, accompanied by strict and selective quality criteria, are transforming our cultural context. The museum will continue to transform with it.