Themônias: montage and LGBTQIA+ activism in the Amazon

Monstrosity, hybridism and sound systems shape the imagination of Themônias, a cultural expression that asserts itself as an anticolonial uprising 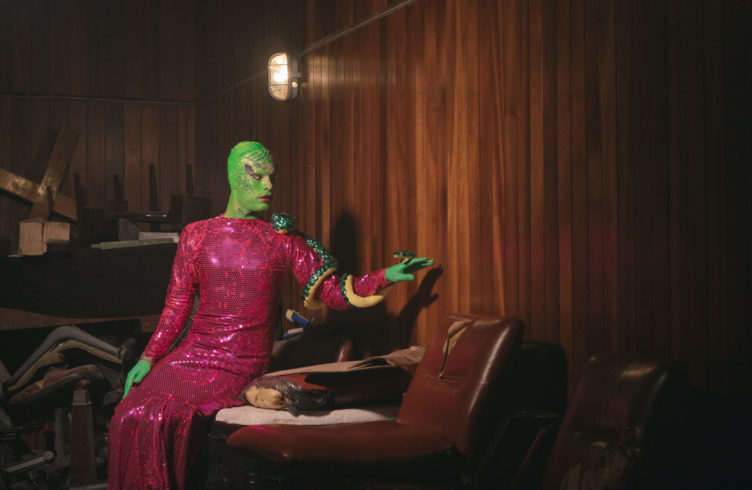 A term that emerged in the state of Pará in 2013 and is spreading across Northern Brazil, being a “Themônia” became a concept, an idea, a counter-hegemonic positioning of dissident bodies who saw in the art of “montage” [“montação” in Portuguese slang], the chance of breaking up with normative behavior and gender standards.

The first and second decades of the 2000s were marked by a strong influence of television and internet programs focusing on drag-queen art as entertainment. Parties and collectives began to emerge that expanded the aesthetic and performative possibilities of this art. With the important presence of cis, trans, non-binary, lesbian, black and peripheral female artists who began to gather in the capital of Pará, the drag concept was reinterpreted to the point that it no longer corresponds to the standard and traditional imagery marketed by the big media.

Monstrosity, the tranimal aesthetics, hybridity with nature were becoming evident in costumes and makeup. Cultural and artistic expressions of the Amazon strongly reflect its black and indigenous ancestry, the imagery of pajelança [shamanism], the carimbó dance costumes, legends of rivers and forests, folk contests (São João), music by Dona Onete, Leona Vingativa, and techno-tacky sound systems. A melting pot of rhythms and images for this group that year after year is building a true aesthetic and political revolution in Northern Brazil. 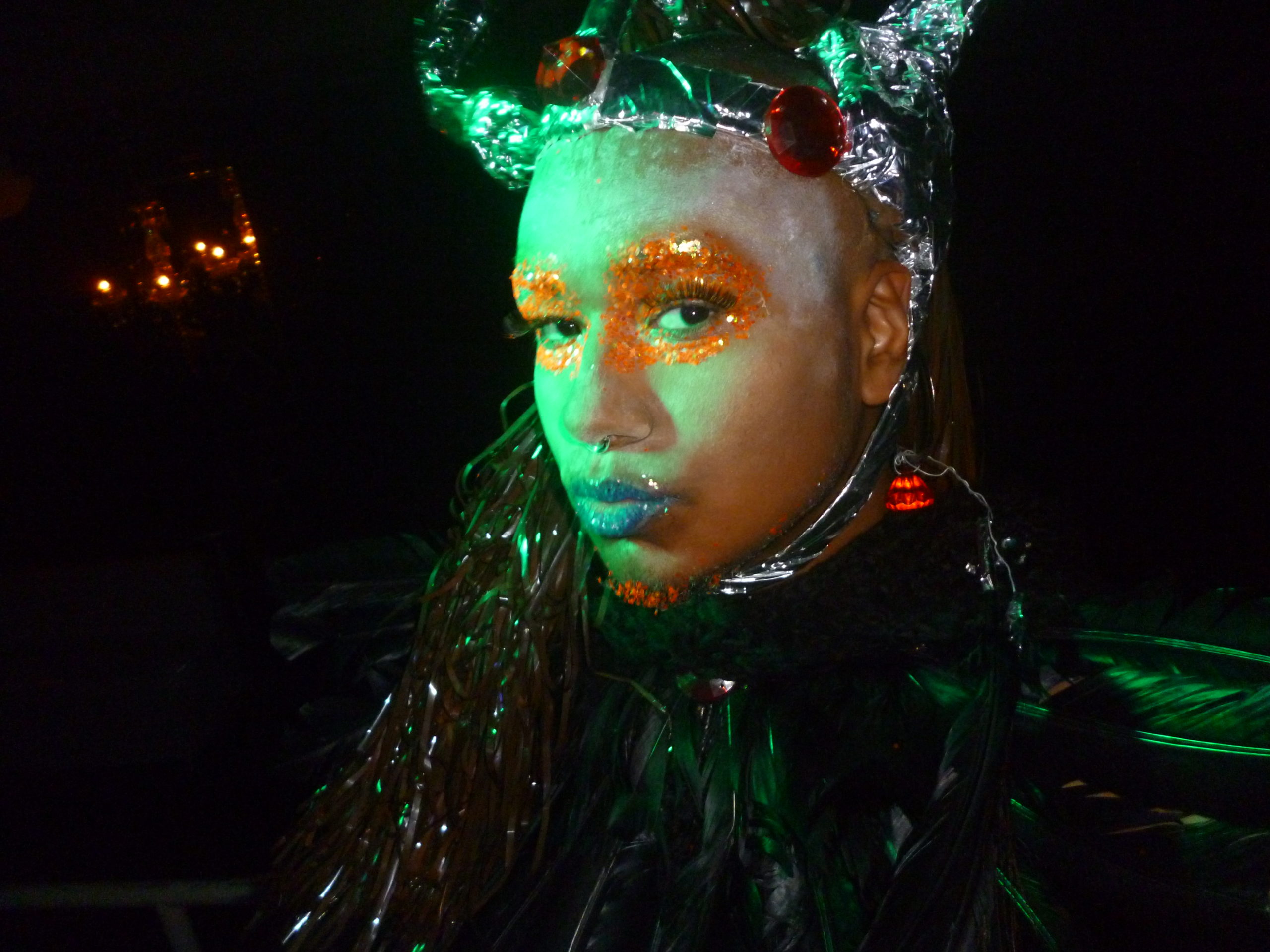 Dirty Night
The “Noite Suja” party, produced by S1mone (Matheus Aguiar) and Tristan Soledade (Maruzo Costa), became a reference and a refuge for LGBTQIA+ artists from Pará. Between 2013 and 2014, there were moments of great fervo [boiling] in the cultural scene of Belém. Many artists who lived in the metropolitan region of the capital began to gather at the houses of friends who lived downtown, creating an important network of collaboration and fostering the emergence of “houses” or “families”, a term very present in the documentary Paris is Burning (Jennie Livingston, 1990), about the ball culture scene idealized by trans and black artists in Brooklyn, in reaction to the racism and prejudice in Manhattan’s gay bars.

At each meeting, more young artists joined the movement, also counting on the presence of names linked to transformist art of the early 2000s, members of the Chiquita party, participants in beauty pageants, who began to experience the opposite of what previous generations held as a beauty standard. The idea of putting together whatever you have at home, transforming precariousness into luxury, anything goes! Flores Astrais, Sarita Themônia, Gigi Híbrida, Cìlios de Nazaré, Skyyssime, Monique Lafond, Pandora Rivera Raia, La Falleg Condessa, Xirley Tao, among many other artists, are some of the names that build up the history of this movement, coming to life also in the work of artists such as Uýra Sodoma, in Manaus. 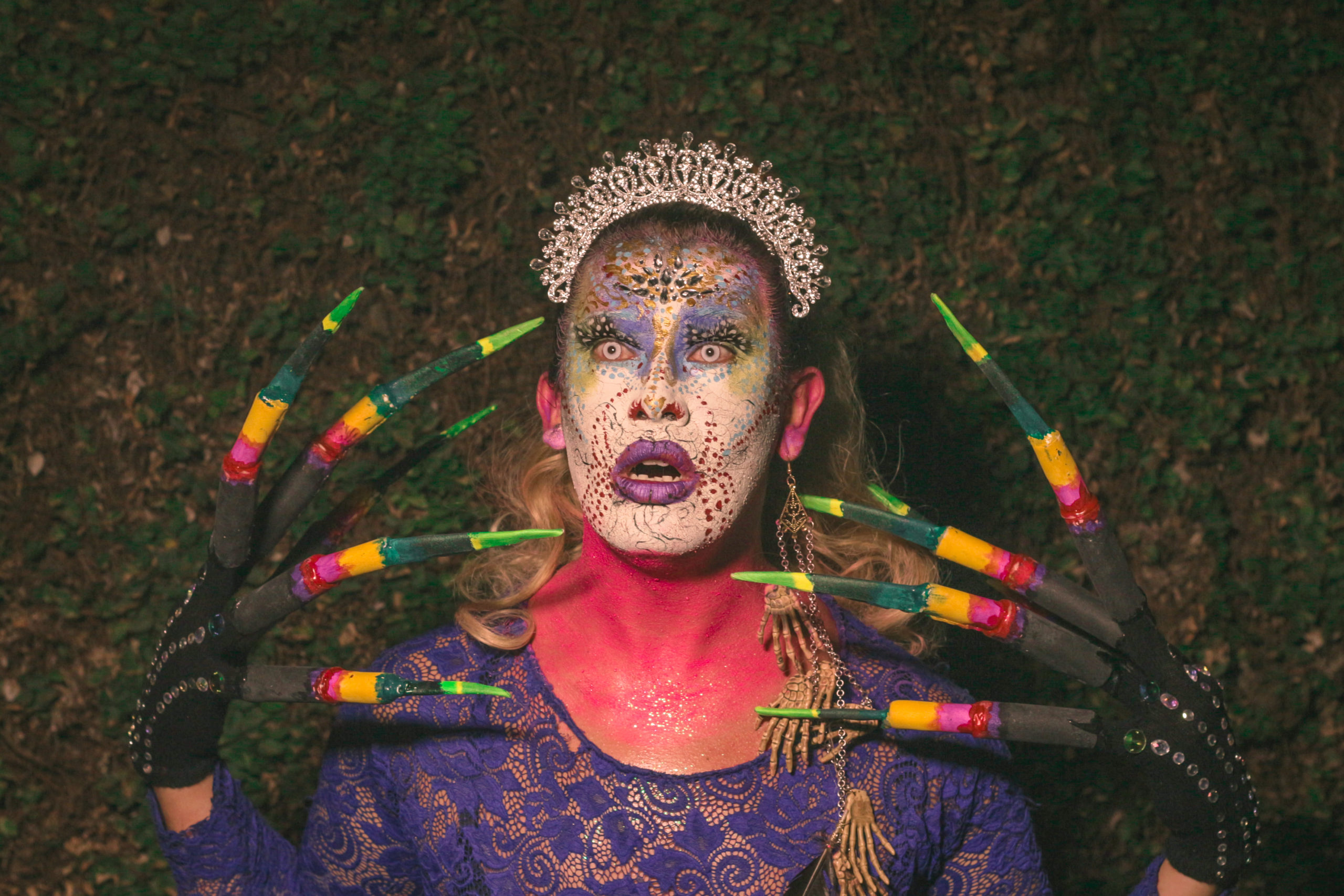 LGBTQIA+ bodies are the bodies demonized by Christianity. The image of the Devil represents sin, what is unacceptable because it is not the pattern chosen by conservative and traditional concepts. Coming out as a Themônia is a form of activism, an attempt to make alive and visible the identities that have always been deprived of their humanities. “We ironized the term Demon, giving new meaning to the reductionist definition for Themônia that expands, multiplies itself, and by also exalting our invisible conditions, we generate a deep strangeness in people,” points out Sarita Themônia in the first issue of the Themônia magazine. 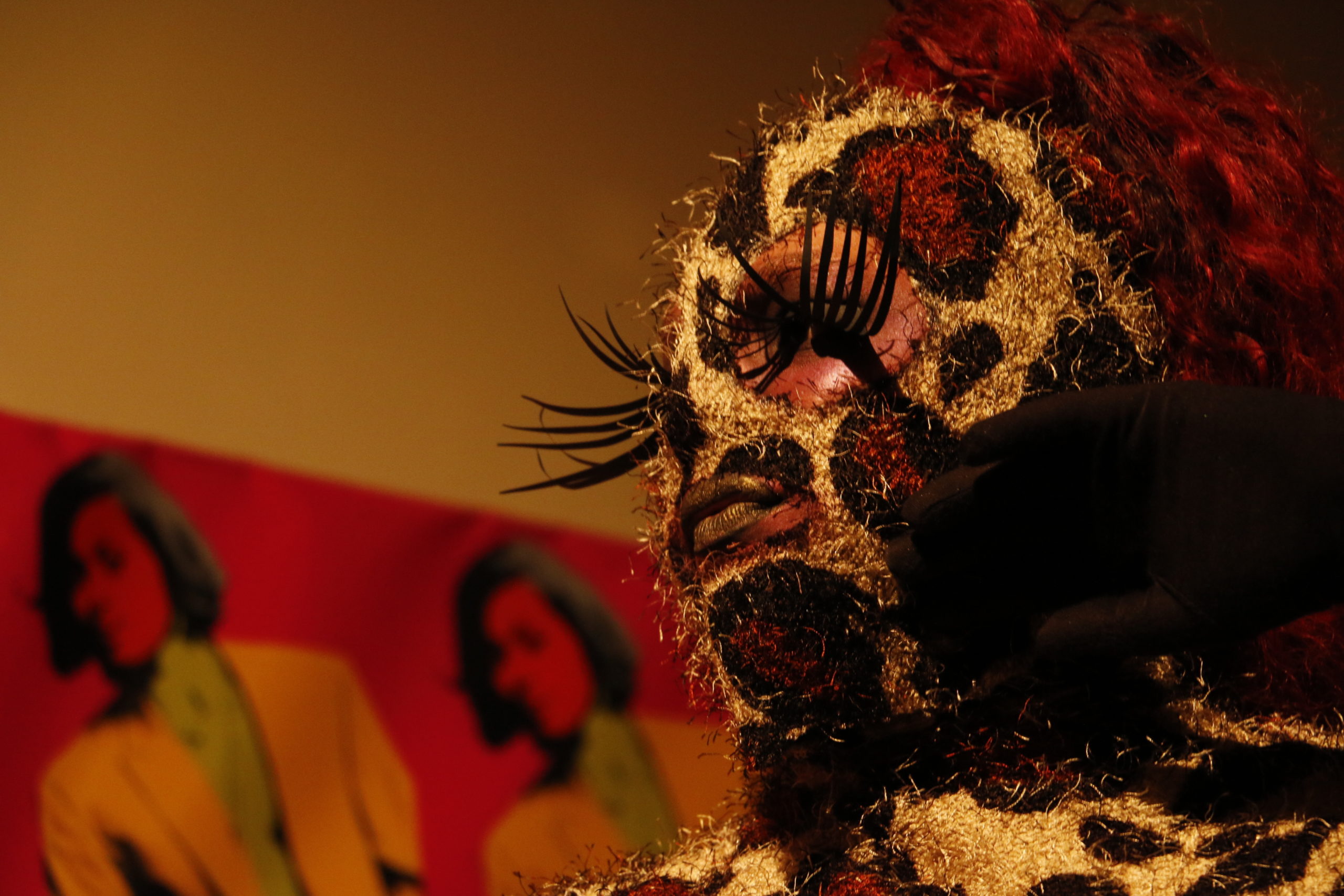 Invasive binary view
Among the various fantastic interpretations created by the European invaders about the supposed “new world,” there was the expectation of a paradise, a lost Eden, and also the presence of monsters and bestial figures in the ocean during the caravels’ journeys. We find this binary vision of heaven and hell in Hieronymus Bosch’s The Garden of Delights (1490-1510), and also in Renaissance paintings and tapestries. Demonization was a methodology used by Christian churches as a justification for colonial violence.

It is not a novelty that Amerindian bodies are demonized. In the 20th century, writer Alberto Rangel described the Amazon as a Green Hell (1908), reaffirming the Christian concept of an environment of condemnation and suffering. Themônias are an anticolonial uprising, a critical response to the civilizing view. Existing as monstrosity, as non-white and non-European beings, is synonymous with resistance for centuries.

The collective has been experimenting with communication means different from the colonizer’s language. A veritable glossary of words emerges that dialogue with sound references from the Amazon region, with mass culture and also the pajubá LGBTQIA+ social dictionary. The movement is alive, pulsating, it recreates and reinvents itself. “Hierocries” and “megazord” are two examples of this new vocabulary.

What to some uninformed ears may seem like screams that refer to a great flock of noisy macaws, is a big sound signal of annunciation and approach of the Themônias collective. A way to frighten the cis/straight/conservatives, scare away omens, pour out moments of joy and happiness, or even ask for help. These are hierocries.

“Megazord is a term for when we need to unite to protect ourselves from some situation or even to move, when we go out together we form a megazord!,” say the Themônias on their Instagram page. In the sentai culture, megazord is a powerful weapon of attack formed from the union of different superheroes. 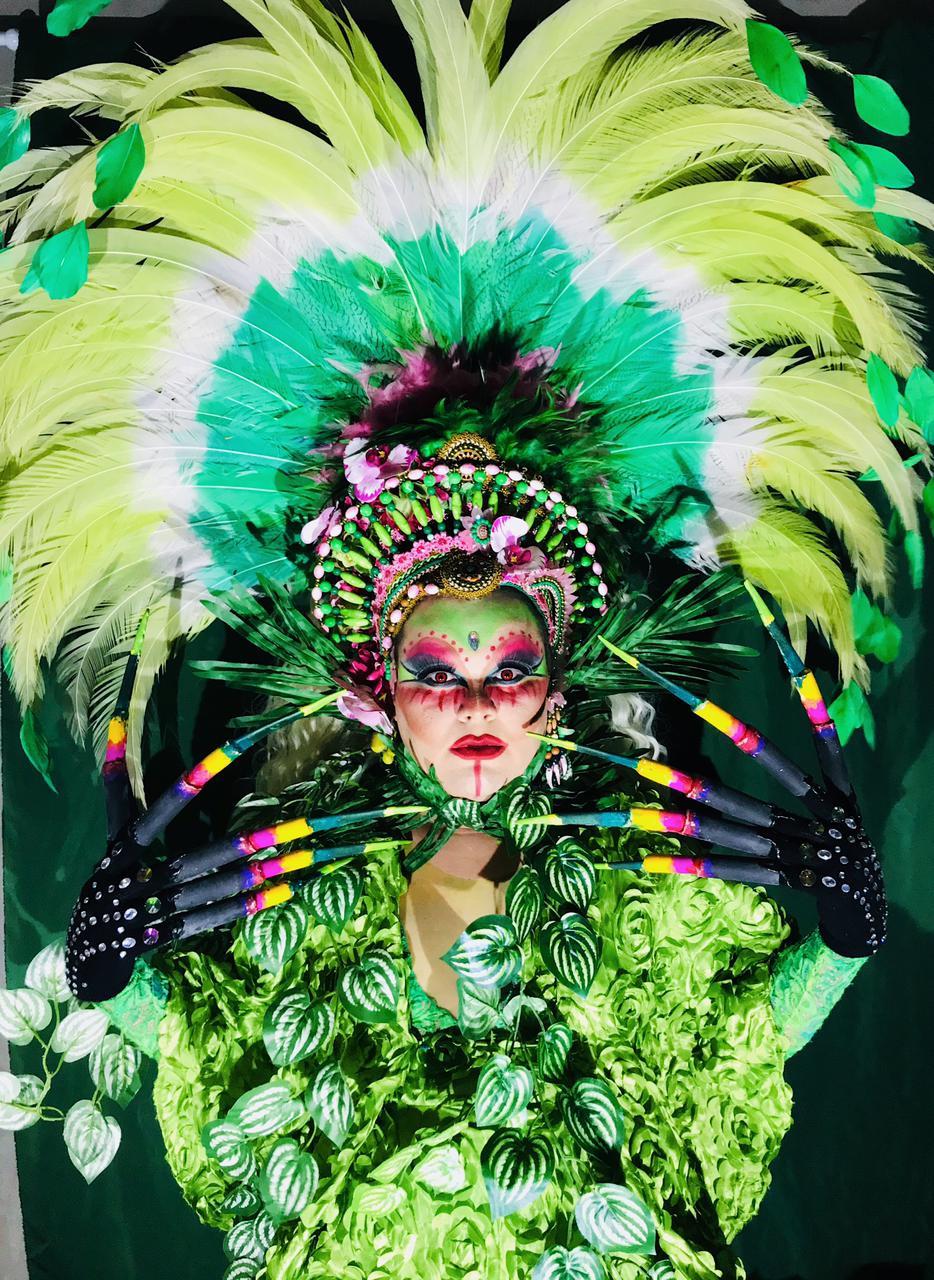 Overflow
Data from the LGBT national union show that the estimated life span of a transgender person in Brazil is 35 years. It also says that every three minutes a LGBTQIA+ person suffers some kind of violence. In a country with such alarming information and with the current government that preaches intolerance and death, this movement’s organization becomes of great importance for the recognition of the Amazon as a reference in the fight against LGBTQIA-phobia.

The Themônias overflowed the state of Pará and are today all over Brazil, expanding its activities beyond parties, organizing festivals, manifestos, magazines, conducting debates on employability, safety, health, access to education and public policies for the LGBTQIA+ community. Themonizing art became an action of decolonization, of reinforcing decolonial concepts and activism of dissident bodies in Latin America.