To Decolonize the Brasiliana

Denilson Baniwa's creative strategy, among other Brazilian artists, of exhibiting in their works what the Brasiliana really is: a set of documents of culture and barbarism inaugurated with the colonial endeavour 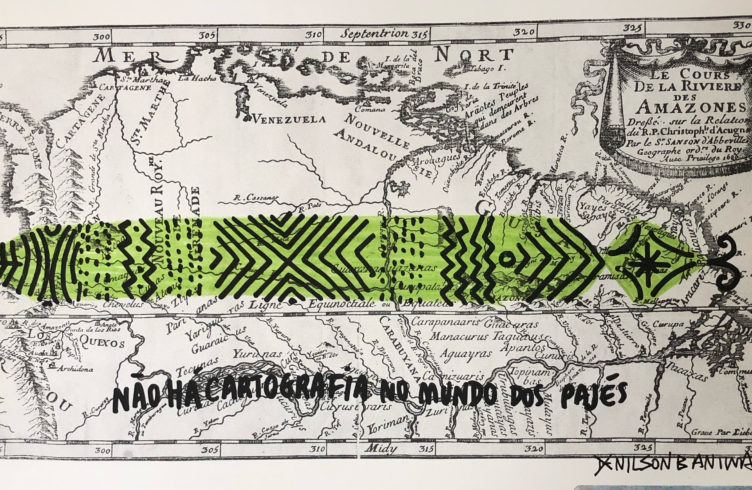 Denilson Baniwa is a contemporary indigenous artist, born in the Amazon inland. For several years, he has been carrying out on different media (painting, performance, engraving, drawing, installation) a critical investigation into the continued violence – by the State and by individuals – committed against the native peoples of the lands that constitute Brazil. Together with a growing number of other indigenous creators, he has formulated ways of resisting to secular exclusions and asserting the right to live differently. Among his many recent works, there is a series of graphic and discursive interventions that he makes on the illustrations of a book called Grandes Expedições à Amazônia Brasileira (Great Expeditions to Brazilian Amazon), a publication that presents hundreds of images made by artists who visited the country as members of cultural or scientific expeditions from the 16th century onwards. A book that brings together representations of human types, scenes supposedly lived and animal and plant species found in Brazil since colony until the beginning of the last century. Denilson Baniwa’s interventions, made with china ink, are called by him “erasures”, as they scratch out existing information and add new ones, modifying the original meanings of those boards. In one of them, called “A Catequização. Reescritura sob Perspect-ativismo” (Catechization. Rewriting under Perspect-Activism, 2020), he adds lines and phrases on the reproduction of a painting that describes the preaching of a priest in a cassock to a group of naked indigenous people, who cluster around him: traits that, superimposed on the priest’s costume, attach to him an erect penis; and phrases, graphically associated with indigenous figures, rejecting that attempt of capturing beliefs. Interventions that bring religious preaching closer to violation and catechizing to epistemicide. In another of these erasures, titled “Não Há Cartografia no Mundo dos Pajés. Reescritura sob Perspect-ativismo” (There Is No Cartography in the World of Shamans. Rewriting under Perspect-Activism, 2020), the artist writes the work’s title sentence on a map of Amazon rivers made in the 17th century and draws, on this western representation that divides unified territories, an image that seems to be an indigenous oar decorated with graphics – an object that, placed horizontally on the cartographic board, articulates and defends a hydric complex occupied by force by strangers. 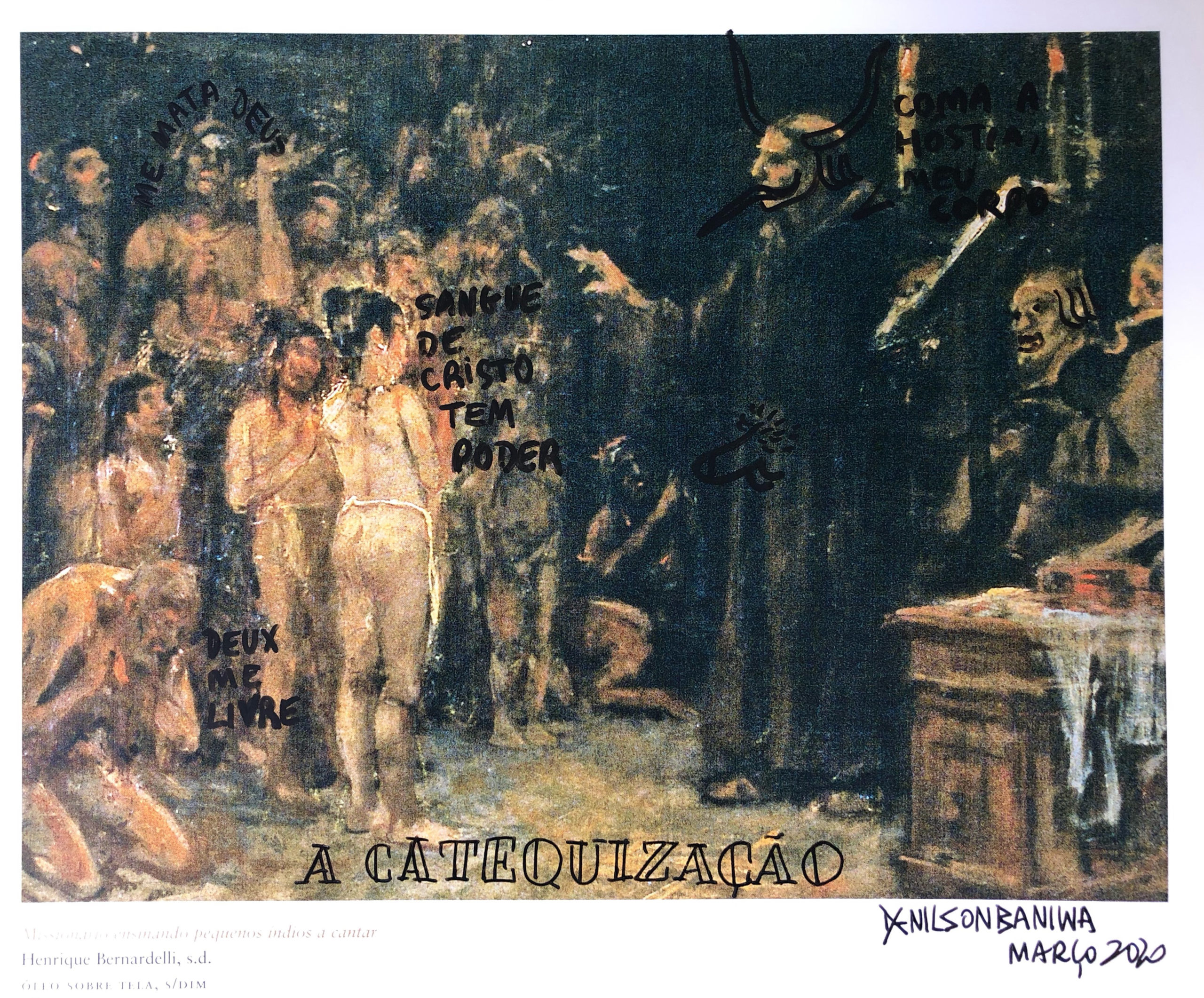 What is conventionally called Brasiliana
This series of works by Denilson Baniwa is an example of a creative strategy that different Brazilian artists have explored, each in their own way: digging, in images of past centuries that have Brazil for theme, signs of the country’s formative and constitutive violence that, transformed, persist to this day. Violence against indigenous peoples who inhabited lands invaded by Europeans and against black people brought by force from Africa and enslaved in Brazil. Among the artists who share or have shared, in several of their works, this strategy with Denilson Baniwa are, in an abridged list, Adriana Varejão, Ana Lira, Dalton Paula, Gê Viana, Jaime Lauriano, Rosana Paulino, Sidney Amaral, Thiago Martins de Melo, Tiago Sant’Ana and Yhuri Cruz.

They excavate images originally produced or conceived, for the most part, by foreign artists, brought to the colonized land by the power owners with the official intent of register the nature and culture of a world in the making. A world that kept traces of something that existed before the colonizers invaded it, but that already incorporated radical transformations due to their very presence. Those representations of Brazil’s social construction, made by those usually called “travelers”, constitute an important part of what is conventionally called Brasiliana – collections of visual information (sometimes accompanied by texts) that have Brazil as theme and which somehow reflect on its formation. Among the best known of those travelers are Albert Eckout, Auguste Sthal, Frans Post, Jean-Baptiste Debret, Johan Moritz Rugendas, José Christiano Jr., Nicolas-Antoine Taunay, Theodore de Bry, Thomas Ender, and Victor Frond.

The Brasiliana images reveal, with greater or lesser clarity, the gradual formation of a place of life divided and radically unequal in terms of the access that white and non-white bodies had to an autonomous and protected existence. Those representations sometimes promote the dehumanization of the colonized lands’ native inhabitants, sometimes describe enslaved Africans and Afro-descendants as men and women accommodated in a subordinate and subjugated position to the colonizer, often minimizing not only all the violence involved in the slavery system, but the continued resistance that such population offered to this unequal distribution of bodies.

The normalization of the European view of invaded and colonized regions, however, goes beyond the period in which it was materialized in the images that constitute the Brasiliana, also informing the memory that is, centuries later, commonly held from that period in Brazil. A memory updated through the uncritical reproduction of those scenes in history school books and in various cultural products, such as exhibitions, films, soap operas, advertisement, stamps and postcards, in addition to being commonly printed on various consumer objects, such as clothes and calendars. A memory from which much of the colonial brutality was erased and, even more evidently, has silenced the continued opposition to this condition of physical and mental abuse. Selective memory that allows the formerly colonized people to be mastered even after the formal ending of colonialism as a political order. A memory that integrates what Peruvian sociologist Aníbal Quijano once called “cultural coloniality”, the result of a process in which “European culture became a universal cultural model”, informing the ways of thinking, acting and remembering of the colonies and former colonies’ inhabitants.

Critical investigation and transforming will
By appropriating representations of Brazil made by traveling European artists and extracting new meanings from them, contemporary Brazilian artists have produced a critique of the almost soothing visual memory of the country offered by Brasiliana. And they do so in order to show how racist violence imposed by European colonizers on indigenous and black people since the invention of the country is inscribed in it, in more or less explicit ways, causing serious damage to portions of its population that have persisted until now. The relevance of this artistic strategy for contemporary Brazil can also be supported by what German philosopher Walter Benjamin understood as the main attribution of the historian, extending it here to these creators. An attribution that unites and links critical investigation of the past and transforming will in the present.

For the philosopher, in On the Concept of History, “to articulate the past historically does not mean knowing it ‘as it actually was’. It means appropriating a memory as it flashes at a moment of danger”. A moment of danger that, in Brazil, has never disappeared for indigenous peoples and the descendants of enslaved black men and women. Moreover, he says: “The gift of awakening the sparks of hope in the past is an exclusive privilege of the historian who is convinced that not even the dead will be safe if the enemy wins. And this enemy has not ceased to win”.

Remembering the dead in Brazil’s formation process – those who suffered the violence of its creation and who have been forgotten and silenced for centuries – would thus be a fundamental function of the historian, but also of the artist, as the mentioned works seem to argue. A function that requires taking a radically critical view of the common memory based on the country’s past, informed by images and texts that ignore or domesticate those brutalities, in addition to concealing or reducing the resistances imposed on them. An “official” memory that is not natural or immutable, but made up of reminiscences that, given the constant reiteration of abuses against the “dead” and those who descend from them, can be attacked and reconstituted on different bases. A memory capable of being remade, pulling away, according to Benjamin, “tradition to conformism that wants to take possession of it” and allowing one to imagine, for a time to come, another distribution of bodies in Brazil.

Assuming the historian role
For these artists, images made by travelers during colonial and imperial times in Brazil should be taken as indicative records of the absolute violence that European colonizers (and their local associates and followers) perpetrated against indigenous peoples and the enslaved black population. In Benjaminian terms, those artists exhibit, in their work, what the Brasiliana really is: a set of documents of culture and, simultaneously and inseparably, of the barbarism inaugurated with the colonial endeavor. Writing history in the “opposite direction” or “against the grain”, as the German philosopher demanded, translates, in the present context, into the decolonization of the Brasiliana made by those creators; in detaching from interpretations of images that did not accept the extreme gravity of everything they refer to. It is a task that requires reconsidering the Brasiliana, but from the point of view of those who appear in it as the vanquished, challenging its softened inscription in the canon of art history. A task that demands exposing the ways in which those scenes betray, beyond what their creators eventually wanted to show, the cancellation of life possibilities previously available to the defeated and the lasting consequences of the violent suppression imposed by the winners, since “those who dominate at a given moment are the heirs of all who have won before.” A project that goes beyond, however, the confirmation of the material and psychic damage imposed on so many people for such a long time, also affirming the unavoidable liability to resume and redo, in other terms, the possibilities denied by a so-called “progress”. By assuming for themselves the role that Walter Benjamin attributed to the historian, those artists do not propose, therefore, to merely describe the past as it would have supposedly occurred, serving, above all, to “bring out the unfulfilled hopes of that past, [to] inscribe in our present its appeal for a different future,” according to Jeanne Marie Gagnebin in Walter Benjamin: Os Cacos da História (The Debris of History). An appeal for the realization of “what could have been and it wasn’t,” as Brazilian poet Manuel Bandeira once summarized.

It is impossible to know, however, how successful these strategies of defending the dead and animating the living might turn out. There are, after all, no guarantees that what art offers will be politically subjectified and will influence, in any relevant way, the movements of a community in an indeterminate future. They are, in any case, gestures and narratives that, at a time of such intense symbolic disputes as the first decades of the 21st century have been, are added to other movements and constructions in a network of resistances to remind anyone of the ways how those past violences are articulated with present violences and are transmuted into these. To remember that there is a contemporary colonial violence, which must be confronted without subterfuge by those who oppose it, making use, for such, of the instruments each one possesses.

This text is an extract from the author’s unpublished essay, Defender os Mortos, Animar os Vivos (Defend the Dead, Animate the Living). 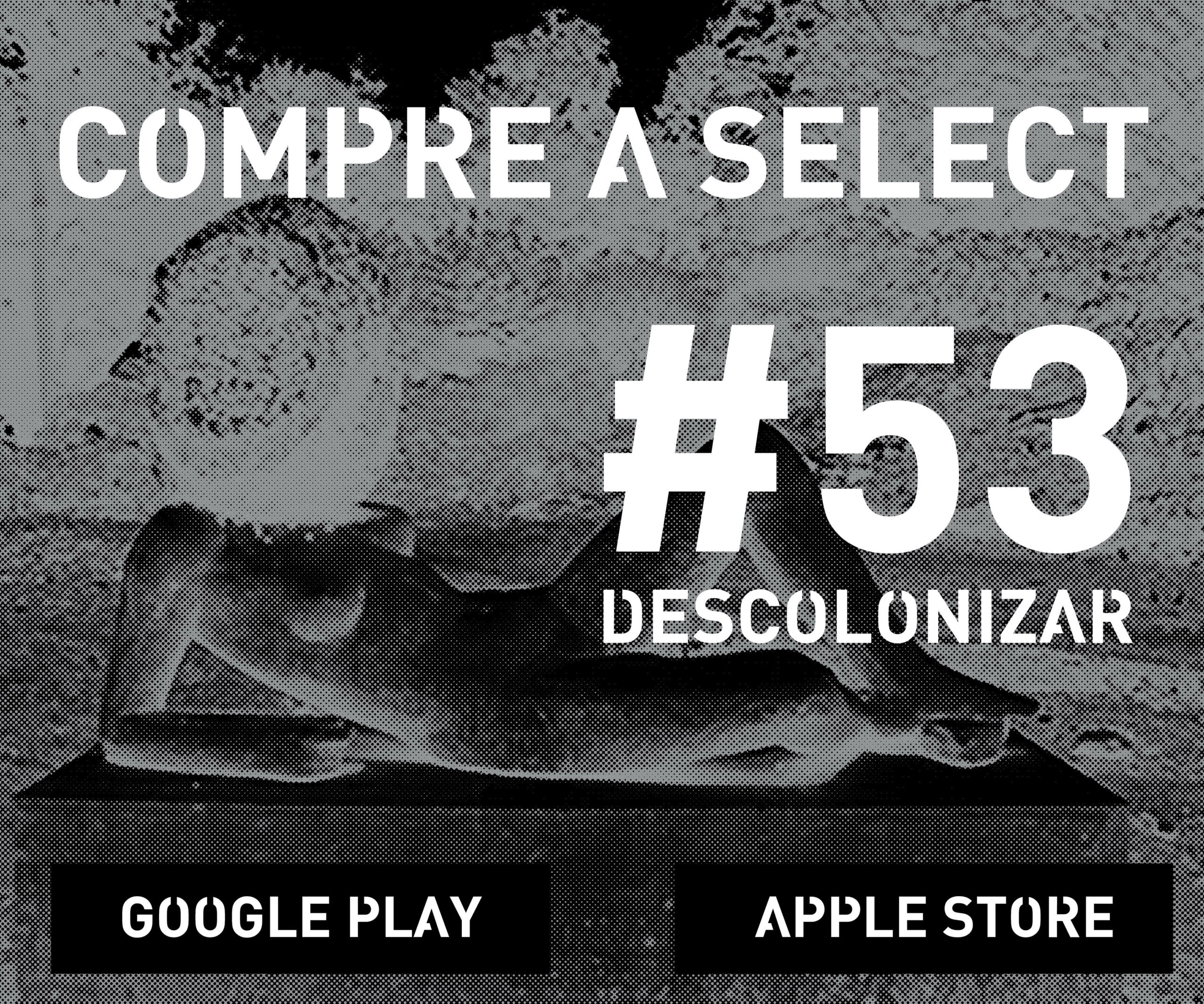