Uýra: the snake of Amazonian waters in the face of environmental degradation

Created by artist Emerson Pontes, the character mixes scientific and ancestral knowledge in an exploration of the diversity of nature and the city 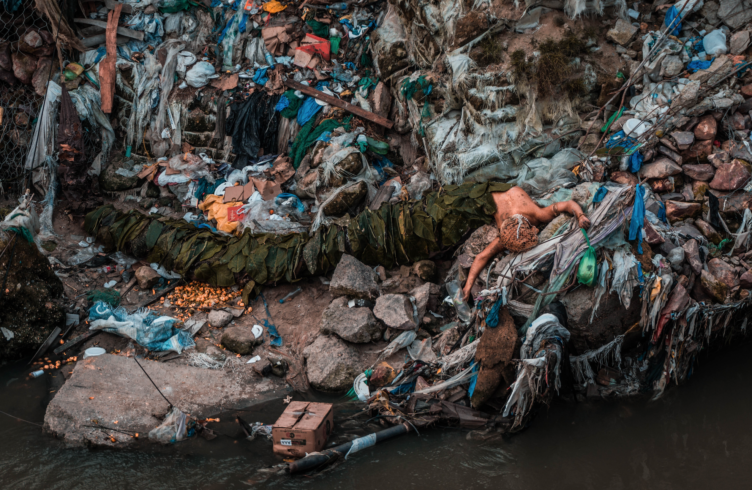 In a Wednesday in 2020, during a video chat, Emerson Pontes told seLecT he took two days to write the minibio he should send to the 34th São Paulo Biennial, to which he had been selected. “Despite being an apparently trivial text, it demands a deep reflection on how to present yourself,” he says. Complexity, in this case, is associated with a series of factors, from his indigenous ancestry, which, although declared, belongs to an ethnicity that Pontes doesn’t know clearly, to the fact that he artistically assumed the persona Uýra, a hybrid being, crossing of scientific and ancestral knowledge, which, in a simplified way, he defines as “the tree that walks,” an Amazonian drag and an “entity in animal and plant flesh.” Since 2016, she has even walked not only on the streets of Manaus, her place of origin, but also in São Paulo, where she performed on Avenida Faria Lima, as part of the EDP nas Artes Award, by Instituto Tomie Ohtake.

To understand Uýra’s DNA, it is necessary to go back to the origins of Emerson Pontes, 30, who lived until he was 5 in Mojuí dos Campos, three hours away from Santarém, in Pará. Although the place was emancipated in 2013, becoming a municipality, and having more than 15,000 inhabitants, in Pontes’ memory the community where he grew is limited to the village around a stream with clean water and lots of forest. According to the artist, the Uýra character comes from that time, even though only later he “transformed” into it. “I have been living in the awareness that Uýra exists for a few years now, but I realize that, when I was 5, it already inhabited me and at that moment there was already a sensory investigation of the smells, images and sounds that existed in that place and that pass through the Uýra”, he says. “Today, Uýra is one of my main channels of communication. I transform and go to the streets, to different places, trying to communicate about the right to life and its violations, which are things that interest me from the perspective of the diversity of forms.” 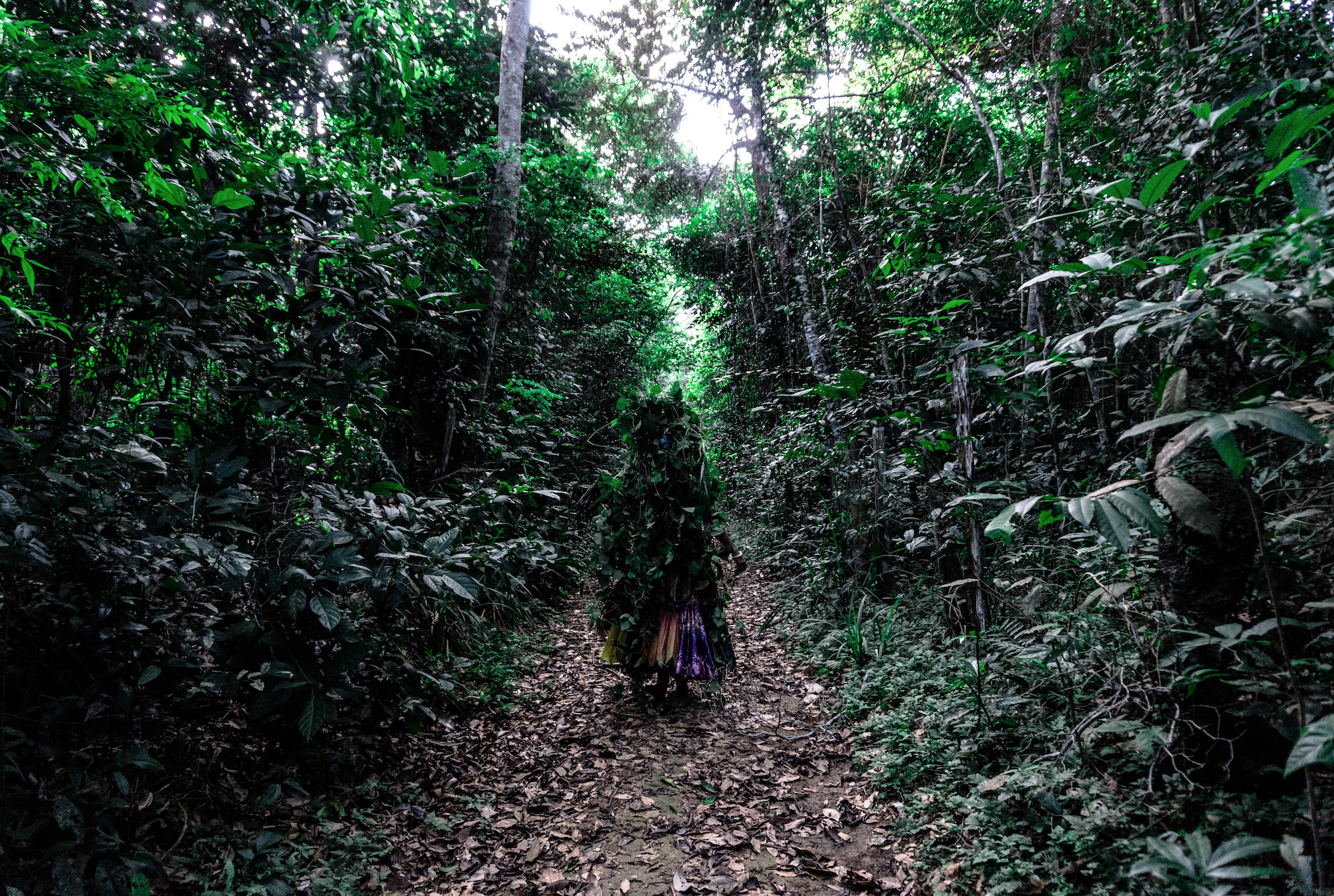 Contrasting Manaus
The memory of living in the community, where he saw sloths swimming in the water and observed the smell and texture of the earth, and the subsequent move to Manaus now appear as obvious contrasts in the construction of Uýra. Maybe that’s why, when asked about his artistic work, Pontes starts with the complexity of the Amazonian capital, where he arrived after a boat trip and saw buildings for the first time. A city, according to him, of crossings, a metropolis of 2 million inhabitants in the middle of the Central Amazon, immersed in water and, at the same time, with almost all the streams that cut through it polluted, in addition to being located in the second state that wastes more water in the country. “It is a city where only 20% of the sewage is collected and only 10% is treated, which was built on top of indigenous villages, in a model that erases traditions in order to settle down. It is rich and technological, but it has one of the worst basic sanitation indices in the country,” he goes on.

These are contrasts that, in Uýra’s skin, are sharp. In the essay “Caos” (Chaos, 2018), part of the series “Mil [Quase] Mortos” (A Thousand Almost Dead), for example, Pontes chose the Igarapé do Mindu, located under the São Jorge Bridge, as the setting for a photoperformance. Polluted water appears in an industrial context, composed of large buildings. The montage, on the other hand, puts a carimbó skirt, full of colorful flowers, extremely clean, in a dialogue with the garbage that forms around it. On Uýra’s face are a species of snail that lives in clean waters and an African snail, introduced into the country, which causes diseases, and, on his head, withered leaves and plants. “I want to bring the contrast between life and chaos and also explore this image that life is resilient within this environment,” he says. “These crossings of the city and the forest are the main basis of my work.”

All of that information are reproductions of his own experience. In the peripheral neighborhood where he grew up in Manaus, it was not uncommon to see rain invade houses on stilts. But the dirty water that came with the floods, spreading disease, also brought many animals. “I remember seeing frogs that I had never seen and found them sensational, I was impressed with those animals.” Later, the artist, who graduated in Biology from the Federal Institute of Amazonas, would develop scientific research on the conservation of Amazonian amphibians and reptiles. “Besides being able to investigate the lives of those animals, I could also get a lot of inspiration from them, because amphibians have a double life, in water and on land, in addition to a series of defenses,” explains Pontes.

Resilience within chaos
Issues such as water and forests contamination are in the series “A Última Floresta” e “Mil [Quase] Mortos” (The Last Forest and A Thousand [Almost] Dead), both produced between 2018 and 2019. In the first series, focused on deforestation, the artist explores the signs of devastation such as fire, which gives title to the first photo shoot, taken on the Iranduba road, where it was possible to set fire to a dry thicket. For the set of “Terra Pelada” (Naked Earth, 2019), Uýra invaded a construction site that was the result of the destruction of several acres of forest.

In “A Thousand [Almost] Dead”, the discussion about the devastation of forests gives way to water contamination, in an investigation into the Manaus creeks, which until the 1960s were still clean. The choice to carry out the first essay, “Chaos”, in a central point of the city, the São Jorge Bridge, was also a way to draw attention to a theme that is almost invisible in the metropolis’ daily life. “It’s a stream that people don’t even look at anymore. It is in total abandonment and those who live in that place also experience the situation of abandonment. But all this life from before, almost dead, continues to move and has a series of species adapted to this environment. It’s resilience within chaos,” he says. Another stretch of the same stream, that of Mindu, was also chosen for the continuation of this series, with the essay named “Boiúna” (2019). In it, Uýra Sodoma is transformed – through a tail made of leaves, with more than 8 meters in length – into the great snake of the Amazon waters, a noble being who becomes powerless in the face of environmental degradation. 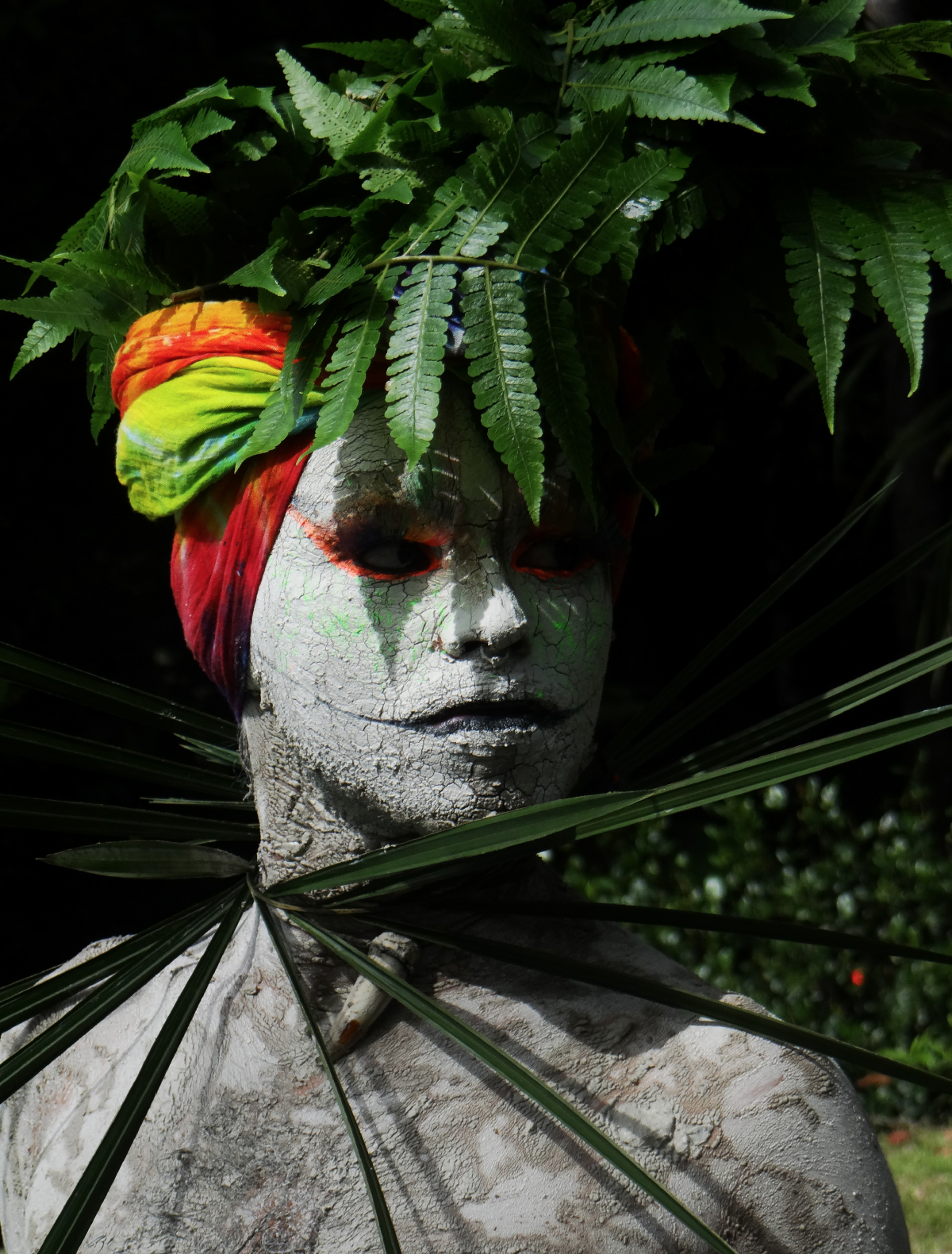 When he started his performances, the artist was concerned with spreading ecological and environmental awareness. For this reason, his works were accompanied by data not only about the forest, but also about basic sanitation, sewage treatment, garbage collection, etc. But he gradually let go of the information – which is evident in the “Elementary” series (2017-2020), in which he runs away from the most evident activism of “The Last Forest” and “Thousand [Almost] Dead” to perform an exaltation of natural beauties, in an exploration of the ways in which water floats or meets the earth. Here, fire appears no longer as a denunciation of destruction, but as a comfort.

Currently, the artist says he understands that the best way is to integrate image and textual construction. And the narrative now relates not only to the forest, but to the beings that inhabit it. “After six years in science, researching life, I realize that the animal and the forest are not just objects of study, but the animal is my brother and the forest is my grandmother,” he says. “I have always been sure that life, in its multiple forms, is very sacred, unique and must be respected.”

Uýra’s performance, therefore, is also a challenge to heteronormativity and a movement towards the insertion of dissident bodies. “When Uýra appeared in 2016, I was already saturated and very hungry, thirsty, to take the life conservation agenda to other places and understanding this life not only as the life of the animal, the plant, the forest, but the transvestite, the black woman, the peripheral being. Life in a broad meaning, in fact.”